This article is over 17 years, 5 months old
THE THREAT of a strike has won major concessions from the Bernard Matthews turkey company.
Downloading PDF. Please wait...
Saturday 24 July 2004

THE THREAT of a strike has won major concessions from the Bernard Matthews turkey company.

A strike was due to begin on Monday this week, but it was called off after the company withdrew plans to extend the working week from four days to five.

Around 1,000 workers had voted for action at the Holton and Great Witchingham plants in Norfolk and Suffolk.

Peter Medhurst, the TGWU union’s regional industrial organiser, says, “We made it clear from the outset that people who work a four-day week wanted to keep it that way. They voted in overwhelming numbers to keep their shift as it suited their family circumstances and working preferences.

“But senior management seemed intent on riding roughshod over them.” The shift changes would have suited the company but would have meant increased transport and childcare costs for many of the workers.

Peter Medhurst adds, “People were fed up. When we confirmed the strike action morale went up.”

Once the strike plan was announced, the company rushed to suggest that it might postpone the shift changes if the union would hold back from calling action. But, quite rightly, the union refused to back off until the company withdrew its plan in its entirety.

Workers have now won a withdrawal of the shift changes, a 3 percent pay rise and a 1 percent increase in pensions.

Don't Argos it, strike for pensions! 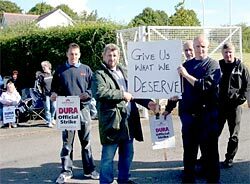