Bhajis, tea and solidarity for BBC strikers in Scotland

Several members of the Bectu union showed their solidarity by refusing to cross the NUJ picket line.

They knew that the BBC will be coming for their jobs, pay and conditions next.

The members who refused to cross the picket line were treated to a hot cup of tea and warm words of solidarity.

One striker told Socialist Worker, “BBC Scotland management has been leading the way in inept management and attacking our jobs”.

Another added, “This isn’t just about the current round of compulsory redundancies. “If they can get away with this they will come for many more.”

Union officials are organising a speaker for the Unite the Resistance in Scotland launch conference in Glasgow on 9 March.

Strikers plan to attend the conference.

In Edinburgh the picket line had shifts throughout the day.

An NUJ member said, “This strike is to protect against redundancies and protect the quality of the service.

“The action has had a big impact on programmes being off the air. I hope they respond. We don’t have enough staff as it is.”

The strike is part of a programme of industrial action which began with a work to rule across Scotland last month.

Thanks to Joshua Brown and Chris Newlove 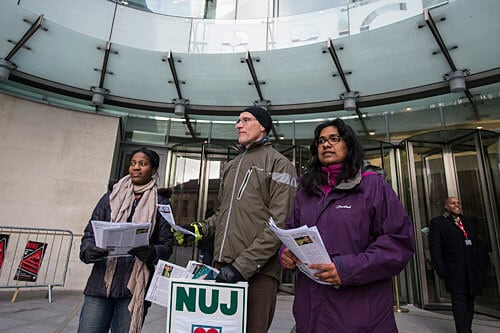