Anti-racism marches sent a message of defiance and unity on Saturday. Around 20,000 marched in London, 1,500 in Glasgow and 500 in Cardiff.

The marches were called by Stand Up to Racism (SUTR) and backed by dozens of trade unions and other organisations.

Labour shadow home secretary Diane Abbott told the London rally, “In the era of Trump and Brexit it’s never been more important to stand up to racism.

“There’s a rise in hate crime, and we have seen a rise of racism across Europe, and we stand in solidarity with all the people they target.

“I visited Yarl’s Wood. The home office tried to keep me out for 18 months. I saw the despair and the misery of the women there. Indefinite detention is symbolic of an inhuman immigration system.

“Labour will continue to stand against racism when I am home secretary.”

Tahirah, a health worker from Bolton, who was on the march in London, said, “The Tories use scapegoating to take the pressure off them.

“They don’t say, ‘We’ve wrecked the economy’. They say blame the people from outside.”

She added, “They always go for minorities first, but when they attack one person’s rights, it’s your rights next.”

Hana from north London was marching as part of a “Hands off my Hijab” bloc. “This is about our dignity, the right not to be told what we can wear,” she told Socialist Worker.

“It’s not just about the hijab, it’s about Islamophobia.”

There was a widespread sense that there’s something fundamentally wrong with our society—and that we need to fight to change it.

As Jade, a student and Jeremy Corbyn supporter from Wakefield, told Socialist Worker, “Politics isn’t working for many people.

“By being here it feels like we can make a bit of a difference.”

Guardian writer Gary Younge told marchers, “We’re here because racism will not go away by itself, it needs to be fought. Racism is not just about bad individuals but about a bad system.

“If they build a wall 50 foot high I will build a ladder 51 foot high and will help anyone that wants to cross it.

Roger McKenzie, the Unison union assistant general secretary, said, “We are fed up with no change. If you don’t do something about it we’re not waiting, we’ll do it ourselves. Join the movement.”

Emma Dent Coad, Labour MP for Kensington, slammed the “racist, self-entitled elite that looks down on people and wants to keep them down”.

Dent Coad represents the area where people were murdered in the Grenfell Tower fire last June.

“A week after the election people’s distrust was proven correct,” she said. “Years of neglect and disdain for tenants led to the worst peacetime disaster and they’re still letting people down every day with endless promises broken.”

Kevin Courtney, NEU education union joint general secretary, said the union was a “proud sponsor of Stand Up To Racism”.

“We defeated the National Front and the British National Party and we are pleased the leaders of Britain First are in jail—but we’re also scared,” he said.

“We’ve see the growth of the Football Lads Alliance and the ‘Punish a Muslim’ idea. Everyone has to challenge racism. The responsibility is on us individually and collectively and our unions have to mobilise as well.”

Weyman Bennett from SUTR said, “If Donald Trump comes we’re going to smash him off the streets.

“Stephen Bannon said history is on his side and there is a warning from Germany with the AfD and Austria with the FPO.”

He added, “A movement is not built by leaders, it’s built by people like you. We’re not going back, we’re fighting back—let’s keep building.” 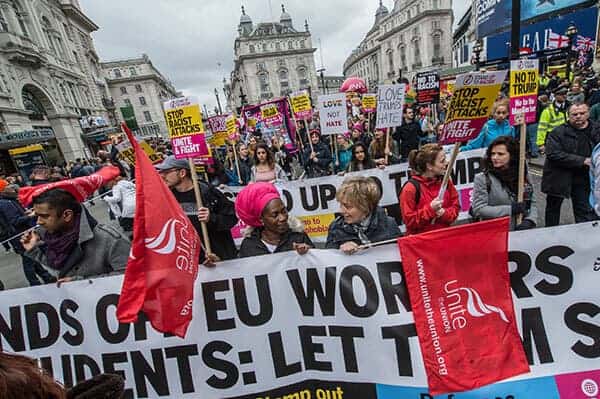 Today’s marches are a boost to everyone who wants to fight racism. They were built local groups and activities such as mass leafleting—as well as social media. This has to be built on in local areas and workplaces so that SUTR continues to develop into an even bigger social movement.

Now more than ever we need a big anti-racist movement. This is a central and crucial part of taking on the Tories, scapegoating and austerity. We need to identify the enemy as the rich and their capitalist system, not migrants and Muslims.

The recent university workers’ strikes have showed how serious struggle unites and energises people against a common enemy.

The Tories want to divide us to make their attacks easier to implement.

Building SUTR and fighting hard against both austerity and racism can push back the right.

Over 1,500 people joined the Stand Up To Racism march in Glasgow.

Richard Leonard argued that the anti-racist movement needed to “be impatient” in its campaigning. He said, “We need to build unity between young and old, between black and white.”

Alison Thewliss said, “We need to continue the fight against racism and discrimination, the threat of austerity, and cruel Home Office policies from the UK government which cause so much distress. I’m proud to see so many rallied to the anti-racist cause today.”

EIS union general secretary Larry Flanagan said, “EIS was pleased to support the demonstration today. It’s important that a message of solidarity goes out to those fighting racism wherever they may be. Together, united, trade unions and campaign groups can express our opposition to those who would seek to divide us.

Anti-racist activist and Scotland’s leading human rights lawyer Aamer Anwar said, “We need a movement that can give us strength when the far right is growing in confidence across the world. We need to stand up and we do that by organising.”

A message was also read out by Aamer Anwar from Palestinian ambassador to the UK Manuel Hassassian that offered the “full support and solidarity” to the demonstration from Palestinian firefighters currently visiting Scotland, which was very warmly received by the rally.

The rally also heard from historian Henry Maitles who spoke on behalf of Scottish Jews For A Just Peace. 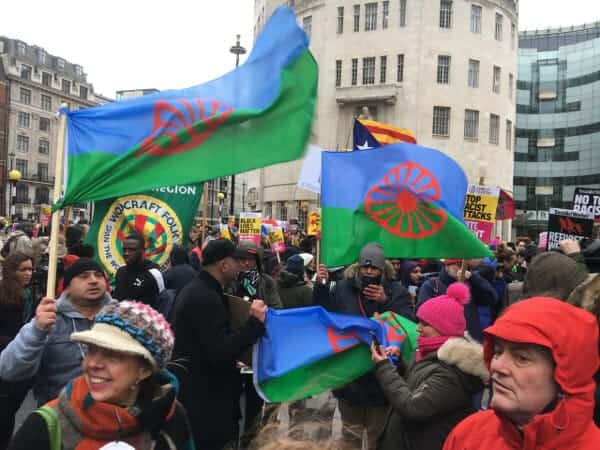 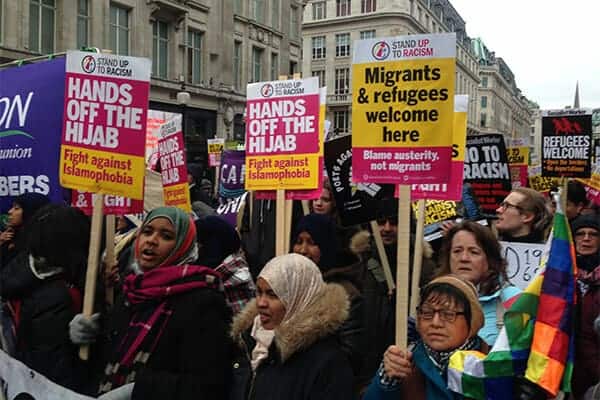 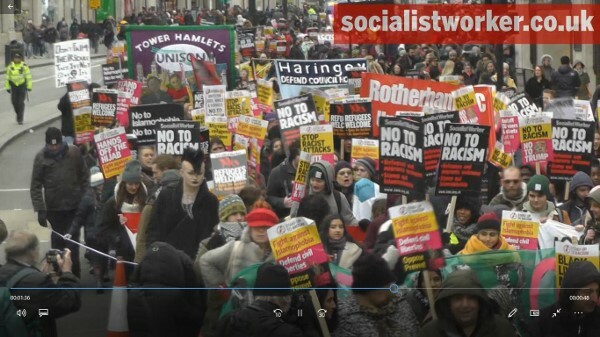