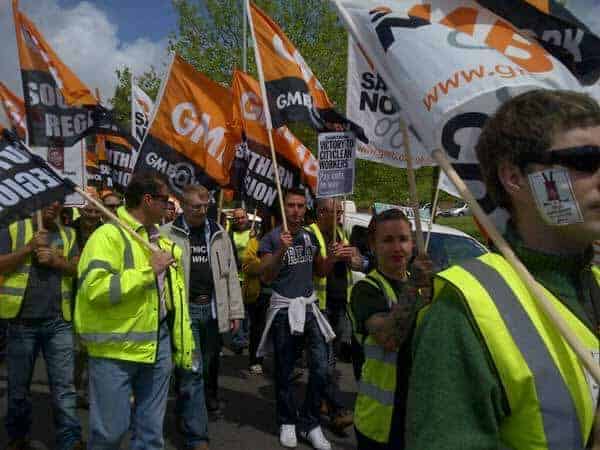 Strikers and their supporters march in Brighton (Pic: Julie Sherry)

Some 300 bin workers in Brighton have joined a seven-day strike to stop an assault on their pay.

The walkout, which began on Friday of last week, has won support from across the trade union movement.

Street cleaner Neil Harding is a new steward for the workers’ GMB union.

“Our strike is solid,” he told Socialist Worker. “We’ve had a 96 percent vote for action on an 86 percent turnout—you can’t ask for stronger support.”

The bin workers, employees of Cityclean and some of the poorest paid in the council, face a savage pay cut.

“If this goes through, people will have to look for another job. Of course there are none”.

The strength of the strike seems to have rattled the council.

It brought in the beach’s lifeguards to clean up uncollected rubbish last week—after promising it wouldn’t hire strikebreakers.

There are also a few people brandishing brooms and calling for the “community” to clean up the city. But the action has remained solid.

From 6am on the first day, pickets stood across the gates. Their placards read, “Have a break Kitcat—leave council workers’ pay alone”.

Neil said the Green Party in Brighton is split over the cuts.

“They’ve been forced to recognise they can’t just ignore us,” he said. “It’s dawning on them that a week-long bin strike ain’t gonna be pretty.”

Over 500 bin workers and supporters marched from the Cityclean depot to Brighton and Hove city council offices last Saturday.

Cars and buses beeped in support of the march. One bus driver came out to shake hands with the GMB stewards leading the march.

Residents stopped in the street to cheer and applaud the strikers.

Members of the PCS, UCU, NUJ and Unite unions joined the strikers in solidarity. They carried union banners in a sea of GMB flags. Local residents and children marched too.

Mick Foote, a rapid response driver at a nearby hospital and GMB member, joined the march.

He said, “We had immense solidarity from the Cityclean workers when we were in our dispute over cuts to services at our hospital.”

At the rally outside the council offices GMB national secretary Brian Strutton said strikers were an inspiration to other people to fight back.

“It is a brilliant day today,” a striking street cleaner told Socialist Worker. “The mood has hardened. Seeing all the people waving, cheering and clapping us today just adds to that mood.

“We back all workers in their disputes, and we hope that what we’re doing can give other workers the confidence to resist and fight back against their bosses.”

Sheffield's all-out strike has shown that workers have power