This article is over 15 years, 3 months old
A huge battle is brewing in Birmingham with serious implications for over a million workers across Britain.
By Charlie Kimber
Downloading PDF. Please wait...
Saturday 03 March 2007

A huge battle is brewing in Birmingham with serious implications for over a million workers across Britain.

It will pitch up to 40,000 workers against the Tory-Liberal controlled council over the “single status” deal that is an urgent issue for everyone in local government.

For over a year, in the absence of a national strategy from the unions to contest single status, workers have hoped there would be a struggle by a powerful group that could serve as an example to others. That could now happen.

The council workers’ Unison union branch has called a mass meeting of its 14,500 members for Tuesday 13 March. It will take place in the Birmingham City football stadium.

“Everyone is excited about the meeting,” says a local Unison member. “Once you hear it’s in a football ground you know it’s not the run of the mill gathering.”

The single status deal, agreed just after Labour came into office, claimed to put right years of injustice where women were paid less than men.

But, as with so many other Labour promises, it has turned sour for those who were supposed to benefit.

In Birmingham women who should be paid more to bring them up to men’s rates will get at best three years back pay. They ought to get six, plus interest.

And, because the government won’t fund the deal properly, many other workers – including women – are seeing their pay slashed to balance the books.

The union branch is calling for a fightback around the slogan, “equal pay for women, fair pay for everyone”.

One Unison member told Socialist Worker, “We’re asking workers whether they are prepared to accept pay cuts, less annual leave, less back pay than they’re entitled to, a new contract of employment with different terms and conditions, flexible working and much else.

“If their answer is no, they have to come to the meeting.

“The council thinks it can get away with playing us off against each other and imposing a raw deal on everybody. Clearly they do not take the thousands of union members or residents of the city seriously enough.

“It’s time to prove them wrong and to show that every Unison member stands for equal pay, no losers and no attacks on terms and conditions.”

Home care workers – most of them low paid women – are in the frontline of the struggle.

They will shortly receive a letter from the council offering a “full and final” offer for the pay discrimination they have suffered.

Workers will be asked to sign an agreement that will prevent them taking the council to court in the future.

The money that the care workers are tipped to be offered seems a lot – and it is a lot to people on low pay. But it is much less than they are entitled to.

The Unison union branch is arguing for unity between different sections of the workforce and between the unions.

“We want to see women who are not getting their back pay fighting alongside others who are having their wages cut,” says another Unison member.

“We are prepared to use legal challenges where they can help, but strikes will be needed if the council won’t give us justice.”

The single status issue will play a key role in Birmingham’s local elections, which are coming in two months.

There have been scare stories in the local press that a settlement on the unions’ terms would send the council tax soaring.

But workers are demanding that the council insists on the government footing the bill for fair and equal pay.

As the local Unison branch says, “New Labour seems to have billions for war and £75 billion for Trident nuclear weapons – yet no money for decent pensions, health care and public services for the community.

“Our services are constantly being handed to private companies that only seem interested in profiting from our essential services.

“We think the government’s priorities are wrong. It should invest in the people that deliver services we all rely on, and therefore in the communities that we are all part of.

“We are asking for support from workers across the city.” 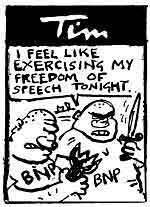