This article is over 17 years, 7 months old
WORKERS AT Euro Packaging in Birmingham are continuing with their industrial action over low pay, long working hours, union recognition and threatened redundancies. Joint managing director Shabir Majid provoked further outrage in a meeting last week by announcing a total of 80 redundancies out of a workforce of 180. Workers were told that the remaining 100 would have greater job security by severing ties with their GPMU union.
By Salma Iqbal
Downloading PDF. Please wait...
Thursday 27 May 2004

WORKERS AT Euro Packaging in Birmingham are continuing with their industrial action over low pay, long working hours, union recognition and threatened redundancies. Joint managing director Shabir Majid provoked further outrage in a meeting last week by announcing a total of 80 redundancies out of a workforce of 180. Workers were told that the remaining 100 would have greater job security by severing ties with their GPMU union.

By the end of the week this threat had been implemented, with union stewards being the main targets for redundancy. One union rep made redundant told me, “We are doing everything we can to save our jobs. We are willing to talk and reach an agreement but the management keep changing their minds-they are completely two-faced. This is not the end. We are going to continue with our struggle. We will fight the management at every opportunity and take more drastic action if need be.”

The strike has halted production at the plant in Highgate, Birmingham, that is responsible for supplying plastic bags to 80 percent of supermarkets in the country as well as other leading high street names.

Management ordered lorries to transport machinery to another plant in Deeside, Wales, but strikers blocked the gates of the factory, preventing the lorries from leaving, which led to the intervention by the police to ensure the movement of machinery from the plant. To prevent the movement of further machinery, pickets later tied a specialised bicycle lock to the gates of the factory.

Management were unable to break this lock or cut through it. Eventually the lorry moving the machinery rammed the gates in order to get through. This also failed to break the lock, but resulted in the gates coming off their hinges.

Kathy Brookes of the GPMU said, “The management promised us they would talk to us about which machines were going, but that seems to have gone. “It looks like they took action to provoke the situation. Our defence has been to take industrial action. It seems it’s the only thing they listen to.”

John Rees and Cheryl Garvey, West Midlands Respect candidates, have visited the picket line to show their support. Support for Respect was high, with strikers holding posters on the picket line and many asking how to become members.

One worker commented, “This government is not helping us in any way. They should be pressuring our employer to safeguard our jobs. Under Tony Blair, too many industries are being moved abroad, which is resulting in increased unemployment. “It seems that this government does not care about ordinary people-they are too busy chasing George Bush around the globe in his war drive. We are very grateful for the support that Respect has shown us-our own MPs and councillors have not shown up here to pledge their support.”

John Rees said, “The people who buy the packaging from this company are some of the biggest corporation in the world such as Tesco and Gap. Both they, and these workers’ employer, can afford living wages and secure jobs for their workers. But the only way we are going to get it is through strong unions and effective solidarity.”

As the crisis at Euro Packaging worsens, workers were to strike for three days next week and every day the week after. A large delegation attended the “Save Manufacturing” demo last Saturday. 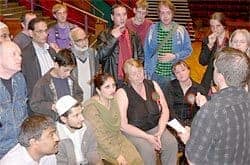