TONY BLAIR and chancellor Gordon Brown faced bitter anger at a public meeting last week-and the audience was entirely made up of Labour Party members. The meeting was called by the Labour Party to boost Frank Dobson’s campaign to become London mayor, and to undermine Ken Livingstone. But Labour’s leaders were left reeling as a big section of the 1,400 Labour Party members who gathered in central London heckled and barracked them. A string of hostile questions showed that many Labour members now believe New Labour is going rotten.

Right from the start it was obvious Blair and Brown were not going to get an easy ride. “It was electrifying,” said Andy Buckley, a Labour member from west London. “People were angry that the leadership was treating them with contempt. I bet they’ve never been late for a meeting with the CBI. A few people started slow handclapping and then others joined in. It was confirmation that we weren’t on our own in being angry with the direction the party is taking. “

Blair began by announcing his “charge sheet” against Ken Livingstone. He quickly denounced allegedly “silly and offensive” remarks from Livingstone backing the protesters against the World Trade Organisation in Seattle. But Blair had chosen completely the wrong target. “This is not what we came to hear,” shouted one man. “The Seattle protesters were right,” another Labour member called out.

Blair seemed shocked and stunned. “It was a completely different atmosphere to the meeting he did before Christmas in Brixton,” said Helen, a Labour Party member who had attended both. “This one was much more confident. People had ceased to be polite or pleading. They were angry and ready to have a go. Blair and Brown just couldn’t believe what was happening. Someone had torn up the script.”

At earlier “Stop Livingstone” meetings which Blair has done, most people came to be convinced or even to enjoy listening to “the leader”. But that mood has completely gone for many. Groups of constituency members had come specifically to raise “difficult” questions.

The first questioner was the wife of a striker at Haringey council, where workers struck before Christmas. She spoke of what the Labour council’s redundancies meant for her family. She said they faced losing their home and were under unbearable stress. “What are you going to do about this?” she challenged. Blair was flustered and thrown on the defensive. He stumbled through a reply about the “difficult choices” which faced the government and the councils.

A string of questioners rammed home the message that Livingstone is extremely popular among Labour members. A woman from Frank Dobson’s St Pancras and Holborn constituency asked, “When Ken wins, what can be done to unite the party behind him after all the slagging off you have done on Frank’s behalf?”

The audience clapped these pro-Livingstone speakers. But there was an even more enthusiastic response for Labour members who tackled the leadership over the party’s policies. The loudest cheer was for Kitty Stuart from Hampstead and Highgate, who called for the rich to pay more income tax to pay for public services. Almost equally popular was a questioner who denounced renewed arms sales to Indonesia. A woman asked Blair why the Labour Party, which she had joined in order to bring more justice and equality, had now “spent the welfare budget on bombing Serbia and Kosovo”. Blair clearly did not like the tone or the combativity of the audience. His replies were sometimes sneering, and often ill tempered.

He begged people to have “the patience and maturity to recognise that progress is a steady and solid process of moving forward”. He added that those who gave up too easily were guilty of “an infantile disorder”. Only at the end did he get a measure of support from the audience by stressing how committed he was to keeping Labour in office. Gordon Brown tried to steer left by quoting Nye Bevan and using the word “socialism” repeatedly. But at the end only a small minority, many of them officials, rose to applaud the party’s top two figures. The majority simply put on their coats and walked out. This was the worst night for the party leadership since the election. It was confirmation of how the mood in Britain is shifting, and how the feeling is over much more profound questions than internal party democracy or the London mayor. 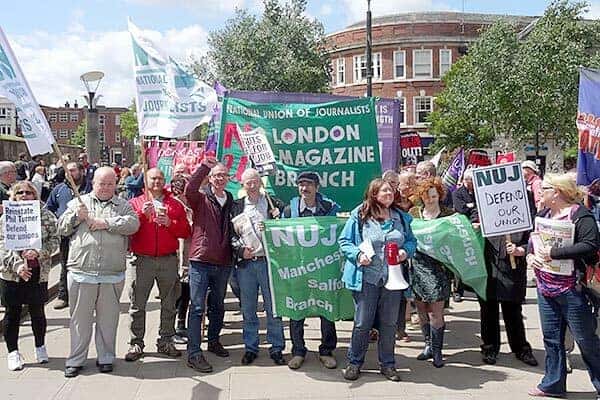 Fill London's streets in protest on 1 May

Planned strike at Pirelli factory in Carlisle called off