Blair promises yet more of the same

This article is over 17 years, 5 months old
In a BBC interview last Sunday, Tony Blair laid out his plans for a third term.
Downloading PDF. Please wait...
Saturday 15 January 2005

In a BBC interview last Sunday, Tony Blair laid out his plans for a third term.

“The election manifesto for this government will be unhesitatingly, unremittingly New Labour,” he told David Frost.

We can look forward to another five years of “market-based reforms” in the NHS, a “tougher line on law and order that allows us to deal with anti-social behaviour” and legislation to resolve “how you get the benefits of immigration but in a controlled way”.

This is why it is so important to have a strong Respect campaign in the general election. We need to show that the workers of this country are not passive and that we will fight back against these attacks. 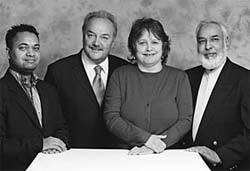 Respect getting ready to fight the general election