This article is over 15 years, 7 months old
Over 250 police marshalled for a raid by armed officers, an air exclusion zone banning aircraft from flying below 6,000 feet over the area, a man shot by police, a barrage of planted media lies, the terrorising of a whole community – all that took place in east London last week.
By Joseph Choonara
Downloading PDF. Please wait...
Saturday 10 June 2006

Over 250 police marshalled for a raid by armed officers, an air exclusion zone banning aircraft from flying below 6,000 feet over the area, a man shot by police, a barrage of planted media lies, the terrorising of a whole community – all that took place in east London last week.

And none of the chemical “weapons of mass destruction” that were supposed to be present in the house in Forest Gate, east London, have been found.

The police are always happy to flex their muscles and intimidate those they regard as suspect. But their reckless raid was encouraged above all by a government which has pushed through more and more repressive powers.

The 2001 Anti-terrorism, Crime and Security Act, which introduced the indefinite detention of foreign nationals, and the 2005 Prevention of Terrorism Act, gave the home secretary the power to impose “control orders” – house arrests – on British citizens as well as foreign nationals.

In October 2005 Tony Blair declared that the “rules of the game have changed” and that the police must be able to implement “simple, summary justice”.

A month later the Commons voted through an extension of the time suspects can be held without trial from 14 days to 28 days – Blair wanted three months.

And last month Blair said he wanted to sweep away key parts of the 1998 Human Rights Act.

Such an approach unleashed the police to shoot down the innocent Brazilian Jean Charles de Menezes in July last year. The shooting of Mohammad Abdul Kahar in last week’s raid echoes that earlier botched “anti-terrorist” operation, also based on false intelligence.

The legal assault has been backed up with public spectacles designed to create a climate of fear and suspicion. In February 2003 some 400 soldiers backed up by tanks went to Heathrow airport to prevent a supposed attack “linked to the Muslim festival of Eid”.

Now we have the Forest Gate raid, personally sanctioned by Blair and home secretary John Reid.

The residents of the area where the raid took place are demanding to know why two local men were arrested and accused of preparing a chemical bomb.

They want to know what evidence there was that the men were engaged in terrorist activities.

After several days spent searching the house in Lansdown Road, counter-terrorism officials admitted, “There is no viable device at the house. There is no device being constructed, or chemicals. There does not appear to be anything there or anywhere else.”

So why did police seal off a neighbourhood at 4am and storm through two homes, shooting Mohammed Abdul Kahar before arresting him and his brother Abul Koyair?

The raid was apparently based on evidence from a police informant. The sentiment among local residents is that the onus is now on the police to prove their evidence was correct.

Blair’s wars in Afghanistan and Iraq have made Britain a potential target for terrorism. And it is his policies that have created the climate in which Islamophobia can flourish as Muslims become the scapegoats for the “war on terror”.

Many in the media remarked that the two men arrested in Newham had become “more religious” and adopted traditional clothing since 9/11 – enough for them to be labelled as “terror suspects”.

One senior police source said of last week’s raid, “The public may have to get used to this sort of incident.”

That is the fear of many Newham residents. One woman from a Pakistani background stopped to speak to me while passing through the police barrier that now surrounds her neighbourhood.

“I lived next door to the house that was raided,” she said, shaking visibly. “Now everyone is scared. What happened to them could happen to any of us.”

Her family was not evacuated, despite police claims that there might be a “viable” chemical bomb in the house that was raided.

Yakub, a Muslim resident of a street next to Lansdown Road, came through the police barrier to speak to me. In broken English he said, “I saw police everywhere. The police are no good.”

When I asked about relations between residents and the police he simply pointed towards his beard. “It’s no good, we are being targeted and we are angry.”

Parveen Akhtar lives two streets away from Lansdown Road. She is the mother of Saqib, a British citizen, who, as Socialist Worker reported two weeks ago, faces deportation as part of the hysteria surrounding “foreign criminals”.

Parveen said, “When my house was raided and they took my son, they sent about ten officers. I am still frightened. But now I keep thinking about them sending hundreds of police to raid that family’s house.

“Why do they see all Muslims as terrorists and criminals? This is racism. This is targeting Muslims. This is a mixed area, but they are dividing our society so there is no peace and no unity. The way that the police are acting is encouraging racism.”

This is a government which launched a war in Iraq on the basis of lies. And now, in an effort to save its own skin, it is delivering repression and stoking division in Britain.

Muhammad Abdul Bari: ‘Muslims feel they are under attack’

‘Evidence’ gathering through informers will lead to more injustice 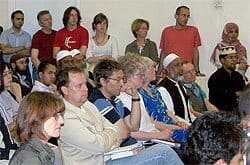