Blood on Bush and Blair’s hands

This article is over 15 years, 5 months old
Lindsey German, the convenor of the Stop the War Coalition, spoke to Socialist Worker about the movement against Israel’s war
Downloading PDF. Please wait...
Saturday 05 August 2006

‘There has been a new development. This is the latest phase of the “war on terror” and there has been a response from the existing anti-war movement. In addition there is a new layer of people who are demonstrating.

Over 2,000 people came to a protest outside Downing Street on Friday of last week. Some 1,000 people have signed up to the Stop the War mailing list.

The movement in Britain is not just calling for peace and a ceasefire. We want peace with justice – not the aggressors achieving through a ceasefire what they could not achieve through military means.

People are outraged that the British government is tailing George Bush. Their next step is a war on Syria and Iran, which will have catastrophic results for people across the region.

The blood of the children of Qana, killed last weekend, is on Bush and Blair’s hands.

I would echo Tony Benn’s statement at last weekend’s event for Palestine when he said, “Blair must go. He doesn’t represent anyone. We have to do all we can to drive Blair out in 2006.”

We cannot continue to have a war criminal as our prime minister.’ 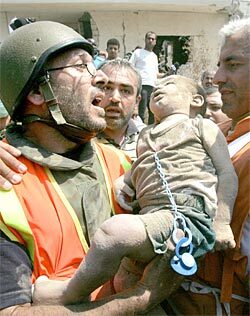 Israelis take revenge on the troops who saved a village

The rage increases in Lebanon every day