Nine rioters were arrested, several cars were damaged and an Asian-owned business had its windows smashed.

The Daily Mail reported that one Asian man was seen with blood pouring from his nose after being hit with a banner.

Anti-fascist activists are warning that the riot is a chilling sign of things to come if the Nazi British National Party (BNP) makes a breakthrough in next week’s European elections.

Andrew from Love Music Hate Racism (LMHR) in Luton told Socialist Worker, “I came out of my front door to find around 100 ‘protesters’ running across the top of my road.

“Some of them had their faces covered with masks or wore black balaclavas. Their placards read ‘No Sharia Law’ and they were chanting ‘Terrorists out’.

“They were banging on Asian shopkeepers’ windows. Onlookers were running for cover. It was very intimidating.

“An LMHR supporter spoke to some of those who had turned up to the protest. They said that they had come from as far away as Cornwall, Bournemouth and London.

“They were almost all male and white with lots of skinheads among them.”

The demonstration was organised by groups calling themselves the “United People of Luton” and “March For England”.

Both groups claim to have no links to political parties, although a similar demonstration held in Luton on 13 April attracted members of the fascist BNP.

Luton has become a focus for far right activity in recent months following the controversy over a protest by a small Muslim group against British troops coming back from Iraq.

Racists have used this protest as an excuse to whip up hatred against the town’s Muslim community. The Luton Islamic Centre was firebombed on 5 May.

The BNP’s website boasts that the party’s “Truth Truck” drove to the main mosque in Luton in March.

Anti-fascist campaigners in Luton have been working hard to fight racism and the BNP.

Andrew said, “I have lived in Luton all my life. These racist thugs are not representative of the town.

“We have had a series of positive anti-racism events in the town recently, all of which were very well-attended by local people of all ages and backgrounds.

“New activists have got involved and we are oversubscribed on our coach to the Stoke LMHR festival.

“We have had an enormous amount of support from the trade unions, the local MP Kelvin Hopkins, Luton Council of Faiths and many local arts groups.

“We need to carry this positive spirit forward and build still further into the community.

“These are difficult times but we feel we are pulling the anti-racist majority together in Luton and creating a real united front with the potential to take on the fascists and win.”

Weyman Bennett, joint secretary of Unite Against Fascism, warned that, “Protests such as these, no matter what their declared intentions are, will invariably attract BNP elements and other far right hooligans.

“If the BNP wins seats in the European elections, we can expect more of this sort of racism and violence.

“That is why it is so important for everyone who opposes the BNP’s thugs and bigots to turn out and vote against them at the elections next Thursday 4 June.” 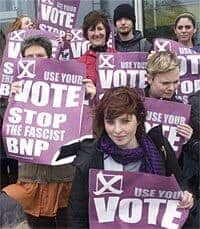 Fighting against the fascist threat across Britain