The press coverage of the recent tube strike in London took me back to a different time, a time when union leaders seemed to rank a close third – behind the Moors murderers and cop-killer Harry Roberts – as public enemy number one.

Union leaders, who in reality were always keen on compromise, were portrayed as the enemy within, hell-bent on bringing down democracy and introducing Bolshevism to Britain.

As for a genuinely militant leader like Arthur Scargill, he was so hated that the Sun even tried to associate him with Hitler.

So it was that Bob Crow of the RMT was treated to the same sort of hostility.

Like union leaders of old, Crow apparently had ulterior motives, was surrounded by dark forces and all in all was a thoroughly bad sort.

No real coverage was given to the legitimate causes of the strike, or just how badly the employers have behaved.

So it all felt familiar, and yet there seemed to be an element to the attacks on Crow that I don’t remember back then… class snobbery.

Crow was described in the Daily Express as having “bovver boy looks” (good to see the Express is so up to date with it’s abuse) – “baseball cap pulled down over his balding head”.

Actually bovver boys were voluntarily bald, they wore tight skinheads and never ever wore baseball caps – but I digress.

According to the Express, Crow is “a staunch supporter of Millwall, the football club with a notorious fan base”.

See what they did there? Crow is not just leader of a union, but an entire breed of football hooligan.

By the same logic Tony Blair is a Newcastle fan (allegedly) – the club whose fans are notorious for wearing very little on the coldest of days. Presumably the Express expect to find him out late at night in January topless with a bottle of Newky Brown in his hand.

There is something about this class snobbery that I feel is very much rooted in New Labour.

Back in the 1970s, many Labour MPs and even some cabinet ministers were clearly and openly working class in origin.

But today? I recently read a Guardian profile of John Prescott which had the usual laugh at his strangulated English sentences.

It then went on to say that we would probably never again see anyone from his background (left school early, worked as a ship’s steward, rose through the unions) rise to such political prominence.

One of the most ignorant and repulsive Tories, Nicholas Soames, used to shout a drinks order at Prescott when he got up to speak in the Commons.

Soames is from the class that travelled on cruises – reminding Prescott that he had effectively been a servant.

One would expect little better from a high Tory with too much money and too few brains. Yet the snobbery seems to have grown.

I remember not long before Blair was elected noticing New Labour and nice liberal types develop a growing obsession with beggars, “squeegee” merchants and the like.

It had a nasty elitist feel to it, and this has grown during New Labour’s time in office. Terms like “pram face” have become common usage among nice middle class people to describe working class women, and of course there are “chavs”.

“Chavs” are constantly attacked and ridiculed. A “chav” (one definition of the word is Council House And Violent), according to most of the “chav hating” sites on the internet (and there are many), is a working class kid into hip-hop who dresses in certain ways. They have their own slang and generally eat badly, shop cheaply, and like Burberry.

It is hard to think that any of that would produce hatred and vitriol on the phenomenal scale that it does.

Here is just one example from the website Chavscum: “Chavs, Hoodies, Neds, Townies, Kevs, Charvers, Steeks, Spides, Bazzas, Yarcos, Ratboys, Skangers, Scutters, Janners, Stigs, Scallies, Hood Rats, whatever you know them as, this site is about them, Britain’s peasant underclass that are taking over our towns and cities!”

Recently a set of posh public schoolboys in Scotland made a video of a “chav hunt”.

Ah yes, after all these years of New Labour, upper class twits can feel comfortable to come out of the closet and join smug middle class Range Rover drivers in laughing at the great unwashed.

Incidentally I filled in a questionnaire on one of the websites to find out “how chav you are”, and joy of joys I’m 37 percent “chav”.

And you know what? I’m quite chuffed about it. Innit!

Pat Stack is a Respect list candidate for the London Assembly elections in May next year. 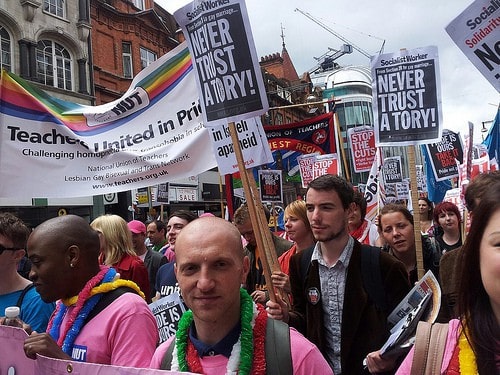 Politics and protest on parade at London's World Pride march 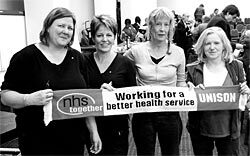