THE STRIKE by lecturers across further education on Tuesday was a huge success. They were demanding a 3,000 pay rise across the board. Everywhere lecturers new to striking joined the union, NATFHE, and joined the picket lines too. Sacha joined NATFHE on the picket line at North East London College. She told Socialist Worker, “I was going to go in to work but someone said to me, ‘Why? They don’t care about you,’ and I knew they were right.

“I’ve been here two years. I’m part time, a single mum with kids. I get no sick pay, no holiday pay and they expect me to be motivated. They’ve got me designing courses for next year when they won’t tell me whether I’ve got a job. The other week I was seriously thinking about getting a job in Sainsbury’s for extra money.” Elsewhere across England and Wales: 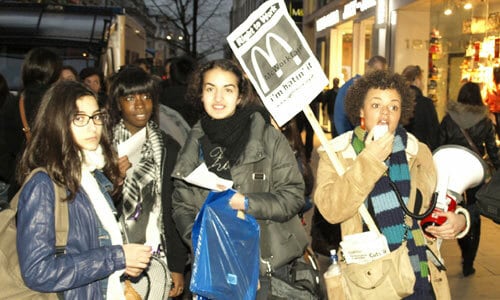 UNITED ON MAY DAY