Bonanza at the top

Bonanza at the top

SENIOR executives at the Royal Bank of Scotland are to more than double their pay in return for an average performance.

Around 20 executives will get a bonus of one and a half times their salary if the bank reaches the average profits performance of other banks.

This is in addition to existing bonus schemes worth up to 100 percent of salary.

Special bonuses are also being paid to celebrate the banks takeover of NatWest last year.

Other board members include Sir Iain Vallance, also the chair of BT. 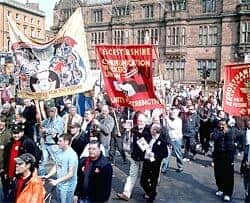 Tories panic as workers fight back