It was the first of three one-day strikes over pay.

They are demanding a 9 percent pay rise and equal pay with the hourly rates of their counterparts in other areas.

Drivers currently get 75p an hour less than those in Edinburgh.

Unite regional industrial organiser Sandy Smart said, “We are looking for parity with other parts of the company.

“But the company is not prepared to give that.

“It has caused quite a bit of resentment and anger.”

An overtime ban by the drivers was also due to start last Tuesday. 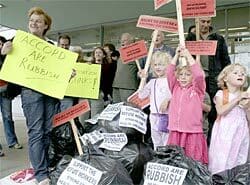