Boris Johnson is mortally wounded, the Tories are weak—now's the time to up the level of resistance
By Charlie Kimber
Downloading PDF. Please wait...
Monday 06 June 2022 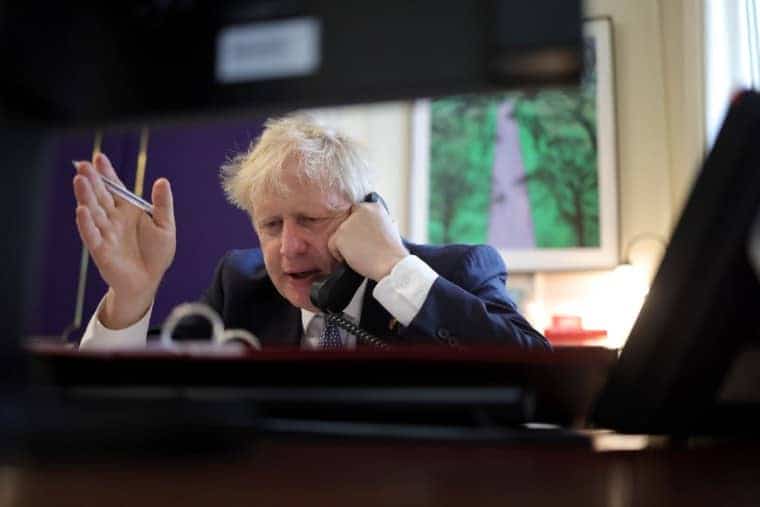 Boris Johnson tries phoning for a friend ahead of the no confidence vote (Picture: Number 10/Flickr)

Boris Johnson is grievously—perhaps fatally—wounded after he only narrowly survived a no confidence vote among his own MPs on Monday. It saw 211 MPs support him, 148 voted against. It is a devastating rebellion against a man who delivered a huge general election win two and half years ago. It’s wholly welcome that this slug could be on the way out.

It’s a worse result than Johnson’s allies had hoped. with 41 percent of his MPs voting against him. He has lost the support of a larger proportion of the parliamentary party than Theresa May did when she faced a no confidence vote in 2018. Within eight months of that result, May was out. It’s worse than when John Major was challenged in 1995.

Johnson’s speech to MPs in a private meeting before the vote summed up his vile politics. Asked about the conduct described in the Sue Gray report on lockdown parties, Johnson said, “I’d do it again.” So the fake apologies about the vomit-stained offices, partying as people died and abusing cleaners was all crap designed to keep him in Downing Street.

But the very worst elements of the Tory government crowded round him. “The home secretary looks forward to supporting the prime minister in the vote this evening,” said Priti Patel’s spokesperson.

Johnson described the result as “good news” because, he claimed, it would allow the government to focus on “what we are doing to help people”. Tell that to the relatives of those who died because of Tory recklessness during the pandemic or those who now have to choose between eating and paying their fuel bill or the rent.

Tory MPs have always been prepared to excuse Johnson for his lies and corruption so long as he delivered electoral success. Now many think he is a loser. One poll last weekend for the Wakefield by-election on 23 June—a Tory seat—put the Conservative candidate 20 percentage points behind Labour.

A document titled “party leadership”, written by an anonymous Tory MP, was spread widely on Tory MPs’ WhatsApp groups last weekend. It cited a survey suggesting that 27 percent of Tory voters think Johnson should resign. It went on, “The booing of Boris Johnson at the Jubilee Thanksgiving service tells us nothing that data does not. There is no social group that trusts him, with even 55 percent of current Conservatives calling him untrustworthy, against only 25 per cent saying he is trustworthy.”

In his desperation to hang on, Johnson might become even more brutal and right wing. There is a deep crisis at the top— but ordinary people have to become actors, not spectators.

It’s important if Johnson goes. It will underline that the hold our rulers have is always fragile, and their filthy lies can always be punctured. He would, of course, be replaced by another Tory committed to corporate power and profit.

But the new prime minister would be much weaker, without a mandate and without the fake anti-elitism that Johnson cultivated. They would be plunged immediately into a sharp social emergency of mass poverty and falling living standards.

This has to be the moment to step up resistance. A shattered government headed by a broken Johnson or one searching for a successor is ripe to be pushed around and defeated. Monday’s vote should be a spur to unleash hell against the bosses and the Tories.

Boris Johnson may bluster on, but the precedents for him are grim. When prime minister Theresa May was challenged in 2018, she got 200 votes, with 117 against her. She resigned six months later.

In the 1995 leadership contest, prime minister John Major beat John Redwood by 218 votes to 89, with another 22 abstaining. He lost the 1997 election in a landslide.

In 1990 Margaret Thatcher was challenged by Michael Heseltine. Although Thatcher won by 204 votes to 152, this was not enough to avoid a second vote under the rules at the time. The cabinet told Thatcher that she would not win a second vote and resigned.

Labour touts fake ‘unity’ instead of anger at elites

Even as Boris Johnson stood on the brink, the Labour Party still refused to do anything itself to push him out.

Instead, its shadow health secretary Wes Streeting used a BBC interview on Monday morning to appeal to the better nature of his “Conservative colleagues”—Tory MPs. “Stop wrestling with your consciences,” he said. “Give the country the prime minister it deserves.”

It was typical of Labour’s weakness throughout Johnson’s crisis. It could have linked partygate to the cost of living crisis and the whole of the Tory Party’s contempt for ordinary people.

Instead, it has narrowed the crisis to a question of Johnson having “demeaned the office” of prime minister. It wants to present itself as a “responsible” parliamentary alternative acceptable to the establishment—and that means not upsetting bosses over pay and the cost of living.

In the same interview Streeting hinted that Labour—for the second year running—would refuse to back a proper pay rise for NHS staff. He only said that Labour would wait for the NHS workers’ pay review body—which last year offered a measly 3 percent increase—to set their wages.

Labour leader Keir Starmer did say over the weekend that Johnson’s unpopularity showed that people “are fed up with the government, particularly its inaction on the cost of living.” Yet Labour won’t say what measures—if any—it has to boost people’s pay. It only calls on the Tories to set an “emergency budget”.

Instead of directing anger at the top, Starmer used the queen’s jubilee to deflect it with patriotism. He wrote that it was everyone’s “patriotic duty” to celebrate. The rich’s contempt for ordinary people lies behind both the Tory and the cost of living crises. Labour’s instinct is to smooth this over with appeals to national unity.

What went wrong for Boris Johnson?

In December 2019 Boris Johnson won a massive election victory and thought he would rule for as long as he liked. He had an 80-seat majority in parliament and a Brexit deal lined up. And he had won votes from sections of working class people in the north of England and the Midlands. Now all of that has turned to ashes.

It’s not just that the partygate revelations confirmed Johnson has acted in the tradition of his ultra-posh Bullingdon Club days at Oxford university. The revelry in Number 10 showed how he treated people with arrogant contempt. He broke the laws he had made.

But this followed a much broader failure. In 2019 Johnson falsely posed as the friend of ordinary people who had been belittled and ignored after the 2016 vote to leave the European Union. He claimed to oppose the elitism and privilege that was squashing their voices. But ordinary people have lost out repeatedly during his time in office.

During the pandemic he consistently put profits before lives, leading to tens of thousands of unnecessary deaths. “No more fucking lockdowns—let the bodies pile high in their thousands,” he said in October 2020. It was a deliberate, conscious decision to send more people to their deaths because Johnson put bosses’ interests before ordinary people’s health. 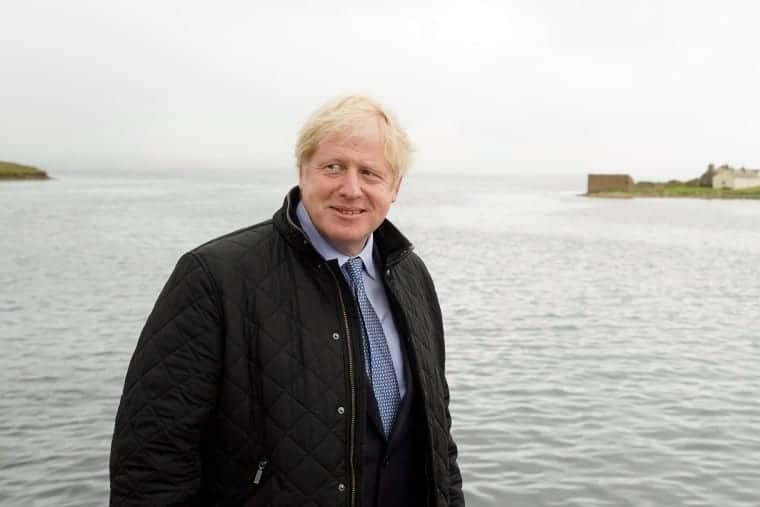 The Tory version of Brexit led to shortages and chaos. Despite his repeated pledges, Johnson has still not solved the Northern Ireland trade problems that came after Britain left the EU. It’s angered his corporate backers and Unionist allies.

For a while, pushing racism and an “anti-woke” agenda seemed to offer Johnson a way forward. As the Tories won the Hartlepool by-election last year, there was talk of the “end of class” and a terminal crisis of working class opposition.

But that has collapsed as a guaranteed way to win the next election. The polls worsened for Johnson as evidence grew of corruption during the pandemic. MPs lobbied for favoured firms to enter the “VIP lane” of contracts and to cream off vast fortunes. The £37 billion test and trace programme enriched private firms and their bosses rather than curbing the virus.

The rollout of the vaccine by the NHS briefly buoyed up Johnson. But then came the soaring cost of living. Pronouncements about buying your food in imperial measurements don’t work when you can’t afford to buy the food anyway. The praise for privatisation, capitalism and markets can’t cut it when the gas and electricity prices go through the roof. That’s why he is now on the rocks.

Boris Johnson has never had a consistent political ideology—except for looking after himself and his immediate coterie of the rich. The Covid crisis forced ruling classes everywhere to abandon a small state and reduced public spending. Instead, to save the bankers and the bosses, the Tories had to pour billions into helping firms keep their workers on the books and protect their profits.

Now the Tories want to recoup that money from working class people through pay deals well below inflation and benefit and pension cuts. Many Tory MPs, and sections of the right wing media, are unsure whether Johnson is the best face for that battle.

But others think the alternatives might be worse. Rishi Sunak, once seen as the obvious replacement for Johnson, presides over the social emergency of price rises and plummeting living standards. Jeremy Hunt is a has-been who—if people remember him—is known for fronting up the savaging of the NHS. Liz Truss is a rabid warmonger who hopes to be seen as Margaret Thatcher reincarnated. That won’t be a winner among those repulsed by Johnson.

However, she chimes with a section of the Tories who think Johnson has been too soft and too left. They want to abandon even the pretence of action over climate change, be even harsher on migrants and to apologise for the meagre restrictions during the pandemic.

The Tories’ problems go beyond Johnson. This crisis raises questions about what is the Tory base—and how it can continue to persuade enough people to back a party that panders to the rich.

Nadhim Zahawi, the education secretary, told Sky News that Volodymyr Zelensky, the Ukrainian president, would be “punching the air” on Monday night because his ally, Johnson, will remain as PM. 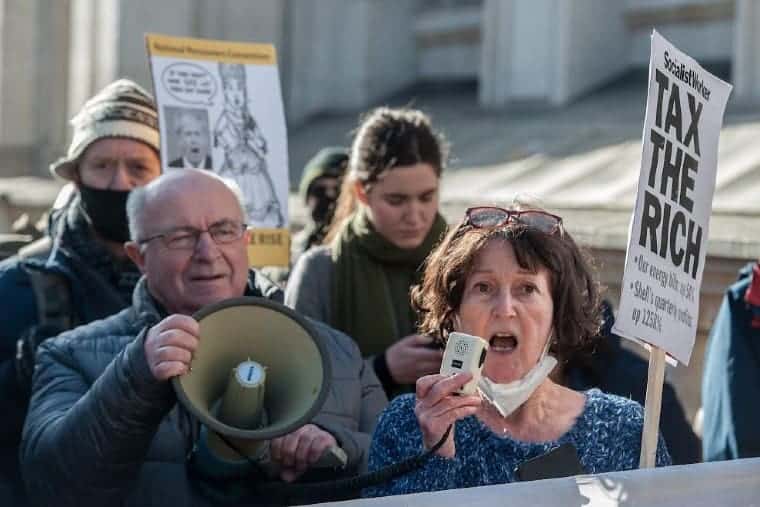