Bosses get away with breaking law

Union leaders must act over lockouts

Bosses get away with breaking law

NEW LABOUR has amended the Tories’ anti-union legislation to make it illegal for an employer to sack workers during the first eight weeks of an official dispute. But two employers, one in Sheffield and one in North Wales, are riding roughshod over the law. Rights at work should be a major election issue. Yet union leaders are not only silent about this issue at a national level, they are pursuing disastrous strategies for the two disputes. Socialist Worker looks at the case of two groups of workers who deserve our full support.

LEADERS OF the engineers’ and electricians’ AEEU union have a disgraceful strategy for foundry workers at William Cook’s in Sheffield. Some 90 AEEU members at Cook’s are fighting their second pay cut in the space of a year.

The 90 workers, who are employed at two of Cook’s three Sheffield foundries, balloted for strike action against the pay cuts and voted 100 percent for action. They began a series of official one-day strikes last month, and were told they could not return to work unless they signed a document effectively renouncing the union. The workers refused, and now William Cook is beginning to sack them. Shop steward Martin Fiddler says, “He’s employing new workers at the cheaper rates we won’t accept. It’s a disgrace, and it will send a bad signal to every other company in the area.”

Kim, another of the strikers, says, “You earn your money by just walking through the door-there is so much dust and crap and noise in there.” Even before the strike the workers called the boss Mr Burns because of the similarities with Homer Simpson’s boss!

Yet Cook’s needs sand to be delivered every three days to keep the foundry running. Pickets have not been turning the sand lorries back because they are not there.

The AEEU is “playing it by the book” while William Cook is flaunting the law and sacking workers after only three weeks. And this is right in the heart of the constituency of Richard Caborn, a minister in the Department of Trade and Industry.

All the workers expect to have had their contracts terminated by 8 June-the day after the general election. The AEEU’s response is to start the industrial tribunals rolling now. The workers deserve every penny they can get out of the company at a tribunal. But more than that, they deserve a union leadership that tries to win the dispute and keep their jobs.

They must not be abandoned on the picket line like the Liverpool dockers were by the TGWU or the Hillingdon hospital strikers were by UNISON. They need solidarity now. The workers were to begin 24-hour picketing on Tuesday of this week. That opportunity must be used to stop the deliveries of sand that keep the foundry ticking over.

The 150 workers at the third section of Cooks-who are in the same AEEU branch as the strikers but are not hit by the latest pay cut-are also balloting for action. The local AEEU official, Derek Simpson, should be in the third foundry convincing them to strike all-out and join the picket line.

Other William Cook’s plants must not handle Sheffield’s work. Workers have been collecting with the Socialist Alliance on Saturdays and are overwhelmed by the support they get. And when Socialist Worker supporters handed out a leaflet at a recent strikers’ meeting, some of the strikers had a whip-round to go towards the cost of producing it!

In the frontline against NHS privatisation

Dudley has been an inspiration

“I’M PROUD to have been part of the strike.” That comment from Dudley striker Phil Tonks summed up the mood of every striker at their mass meeting on Wednesday of last week. They voted to continue their strike until next Monday. This is when the contract to transfer the workers out of the NHS under the Private Finance Initiative (PFI) is due to begin. The 600 workers who provide support services across the Dudley Group of Hospitals have been taking strike action over the last nine months. Their determined fight ensured that contract was repeatedly delayed, to the frustration of the NHS trust and New Labour.

But the trust and the private consortium Summit Healthcare eventually signed the contract over the bank holiday weekend. “We are bitterly disappointed,” said Phil. “But people are also angry. There is a mood of resentment, particularly against the government. “New Labour kept saying that PFI was the only game in town.” The strikers feel let down by their UNISON union leadership.

Phil says, “They absolutely could have done more for us. It’s time we looked seriously at the union’s links with Labour and thought about cutting our ties. Continuing

“UNISON told us, ‘Keep quiet, get Labour elected.’ But now they are in government there is no inkling that things have changed for the better. “New Labour just says the Tories will be worse. But that is little consolation for us Dudley health workers.” Those workers will soon be employed by Interserve Facilities Management. This is the new name for Buildings and Property, one of the companies in the Summit Healthcare consortium.

The firm already has its claws into health care in London’s UCH hospital. The transfer of the Dudley workers will take place under TUPE rules. This means they will temporarily keep their existing wages and conditions. But it means the workers’ jobs and the service they provide has been privatised. The company could try to undermine their pay, conditions and union organisation in the future.

About a third of the Dudley strikers will be transferred on Monday. More will be transferred in June and July, with the remainder in February next year. The Dudley strikers have been an inspiration to trade unionists and campaigners across the country. The strikers took on the government over a key policy-privatisation of the NHS. The strikers were due to hold a final mass meeting on Friday of this week in tribute to that struggle.

They are also continuing to build the election campaign for striker Angela Thompson, who is standing as a local Socialist Alliance candidate.

Attempt to stifle debate in Unison 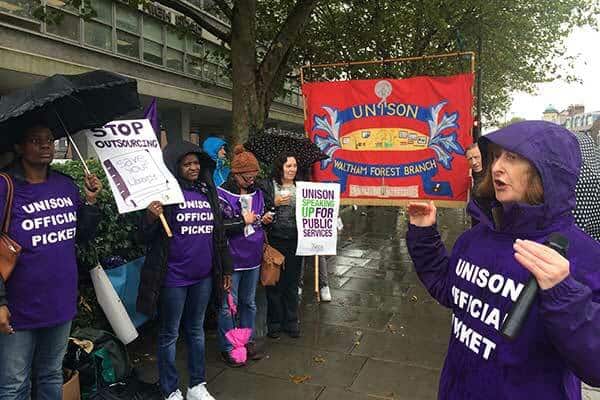