This article is over 9 years, 10 months old
Protesters exposed central London shops that exploit the government’s workfare scheme on Saturday. The protest was one of 38 around the country on a national day of action called by Boycott Workfare.
By Ken Olende
Downloading PDF. Please wait...
Sunday 04 March 2012

Protesters exposed central London shops that exploit the government’s workfare scheme on Saturday. The protest was one of 38 around the country on a national day of action called by Boycott Workfare.

Some 60 activists moved up and down Oxford Street—London’s central shopping street. Marchers chanted “Real jobs now” and “Chris Grayling, Get out! We know what you’re all about! Cuts, job losses, money for the bosses!”

Emily Watson from Boycott Workfare told Socialist Worker, “Workfare doesn’t even work as a policy on their own terms—it makes unemployment worse. I’m unemployed and I don’t want to be exploited.”

A small posse of police flanked the protest, trying to block the entrance to each workfare shop before protesters arrived and make sure that none were occupied. They stood outside Pizza Hut, Holland and Barrett and McDonald’s. Police confronted demonstrators who tried to occupy McDonald’s near Centrepoint and stopped an occupation of WH Smith in the Plaza shopping centre from occupying—though the Plaza itself was temporarily occupied.

The protest finished at Holiday Inn on Welbeck Street, which is part of the Workfare scheme.

Right to Work activist Mark Dunk said, “Today’s demonstration shows that the slave labour schemes can be beaten. We won’t be frightened off by Tory millionaires sending their police force to attack us. We will keep protesting until these firms pay their staff and workfare is scrapped.”

Marie Lynam from Kilburn Unemployed Workers Group said, “Workfare will diminish the level of wages. The government is out to finish off the minimum wage. Attacks on the unemployed are happening all over Europe and we need an international response. We must put pressure on the trade unions to take action over this.” 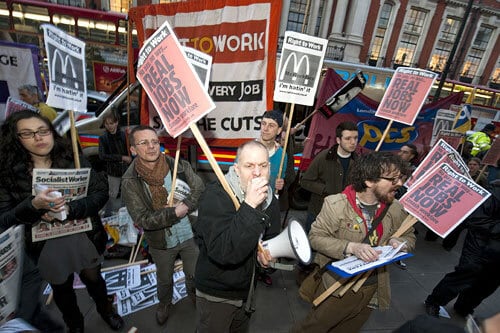 Right to Work protest at McDonald's after Tories' partial retreat