This article is over 9 years, 9 months old
George Galloway’s Respect party has launched its campaign for the local elections in Bradford.
By Anindya Bhattacharyya
Downloading PDF. Please wait...
Tuesday 10 April 2012

George Galloway’s Respect party has launched its campaign for the local elections in Bradford.

It hopes to build on his surprise landslide victory in the Bradford West parliamentary by-election last month.

Respect is standing 12 candidates in wards across the city. A third of Bradford’s 90 councillors are up for reelection this year.

Galloway said he hoped Respect would form a “bridgehead” on the council.

The party will campaign on the same anti-cuts, anti-corruption and anti-war ticket that pushed Galloway to win at the end of last month.

Bradford is also voting on whether to switch to a system of directly elected mayors. All three major parties oppose the change—but Respect is campaigning for it.

That vote ended in Respect-backed independent candidate Lutfur Rahman winning the post, despite being blocked from running for Labour.

The nominations for local elections in Bradford closed last week. Respect had to deal with a flurry of interest after Galloway’s win.

Respect says it has avoided standing last minute opportunists and instead chosen candidates with a track record of local campaigning.

There is a dispute over the party’s candidate in one ward, Toller, with the council claiming they missed the nominations deadline.

Respect is challenging the decision, which it claims stems from its rivalry with the local Labour Party.

Candidates include former student activist Ruqayyah Collector, former Green Party candidate Dawud Islam and Sarah Cartin, a local CND activist who was involved in the We Are Bradford initiative against the English Defence League in 2010.

Salma Yaqoob, Respect party leader, welcomed the nominations. “Our candidates will reflect the diversity of Bradford,” she said.

“These are individuals who have already shown their commitment to selflessly battling for Bradford as opposed to those who engage in local politics out of self-interest.”

Bradford has a large Pakistani population and mainstream parties have cultivated votes there on the basis of clan and family affiliation—the so called “biraderi” system.

Many young people involved in backing Galloway’s campaign did so with the aim of breaking with “biraderi” affiliations.

“I’m sick of hearing that I should vote for someone because his dad is from the same village as my dad,” one Respect volunteer told Socialist Worker during the by-election campaign.

But the vote will also be a chance for Bradford to break with decades of poor Labour and Lib Dem administrations.

Respect supporters in Bradford point to the huge hole in the ground in the city centre, where a Westfield shopping centre was once planned to be built.

They say it is an example of the neglect that has characterised the city.

Salma Yaqoob added that the candidates will be a “much needed breath of fresh air in Bradford local politics”. 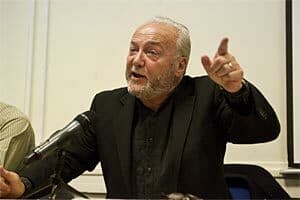 Meet the Socialist Worker candidates in the May elections