Under attack – they fought back

By Theresa Bennett and Kevin Ovenden

LAST weekend Bradford became another city in the north west of England where Asians were forced onto the streets to defend themselves against Nazis. Just days before the riot some 130,000 black, white and Asian people had enjoyed a multiracial music festival in Bradford. But the authorities cut the festival short. They claimed it couldn’t go ahead as the National Front (NF) was threatening to march.

They allowed a handful of Nazis who have been touring towns in the north west of England stirring up tension to dictate what 130,000 people can do. Some 2,000 joined the Anti Nazi League’s mobilisation in Bradford last Saturday to stop the NF.

They included councillors, school children and trade unionists. The police made no attempt to arrest the groups of Nazis in twos and threes who tried to provoke the crowd. Some Nazis spat and swore at two white women. But the police let the Nazis walk away.

One of those goading the crowd was well known Leeds Nazi Dave Appleyard. Even the police were forced to remand him in custody for racially aggravated violence.

The police waded in as anti-Nazis tried to challenge the Nazis. Officers began stopping and searching young Asian men. Their actions fuelled the growing anger amongst local Asian people and anti-Nazis.

The Nazis sparked off last Saturday’s riot when a gang of racists left a city centre pub and racially abused a group of Asians. The racist gang included a prominent Nazi from the local area who punched an Asian man. As the crowd moved towards the pub the police arrested three Asians. The police then forced hundreds of people out of the town centre into Manningham using dogs and mounted police.

It was the final straw for many young people. Buildings like the Labour and Tory clubs were targeted, and stones were thrown at the police. During the riot a white man who had attacked Asians was stabbed. Press and politicians are wringing their hands and condemning “thugs on both sides”.

But they refuse to blame the Nazis who are arriving in towns like Bradford, attacking Asians and being allowed to get away scot free by the police. They want to give confidence to the minority of racists in the area to blame Asians for poverty and deprivation. The Nazis’ poison must be stopped.

It is a disgrace that sections of the media like the Daily Mail have echoed Bradford Labour MP Marsha Singh’s call for a ban on Anti Nazi League mobilisations.

Alongside stopping the Nazis, local anti-racists have to argue on the estates and in communities against the racist ideas the Nazis are feeding off. The day before the planned NF march BNP leader Nick Griffin addressed a meeting of 150 people in the predominantly white area of Eccles Hill in Bradford.

The BNP has no solutions to poverty in the area, only violence and race hate. Anti-racists need to argue that Asian and white people united are a powerful force to win the resources that both desperately need.

THE POLICE have repeatedly protected violent Nazi marches. They have battered black, white and Asian people in those areas who came together to stop race hatred. During the general election campaign the police forced a way through for three Nazi NF marches in Bermondsey, south London.

7 April: Over 500 black, white and Asian people rally in Bermondsey to oppose an NF march. Hundreds of police ensure that 30 Nazis are allowed to demonstrate. A member of the local Race Equality Council says, “The National Front are allowed to march, yet we are penned in.”

12 May: Police protect the Nazis for a third time. The police have protected Nazi marches in Kent over the last two years, even though local people do not want them there. They did the same when the NF, then the main Nazi organisation, staged Hitler-style marches in the 1970s. The police:

On 3 July 1981 the police allowed Nazi skinheads to hold a gig in the middle of Southall. Thugs attacked an Asian woman in a shop. People fought back. The press spoke of mindless rioting in Southall and in other inner cities, where black and white people fought back against racism and poverty over the following seven days. The media all but ignored the murder of Parven Khan and her three children, who were killed in a racist firebombing in Walthamstow the day before the Southall riot.

ONE 16 year old Asian said on Saturday, “Bradford is one of the most integrated cities in the country. The NF want segregation.” A 15 year old Asian added, “The media seem to put a bad name on Asians. They say, ‘Asians started it.’ They want people in Bradford to fight amongst ourselves. They show the riots, but they never show whites and asians just getting along.”

He is right. Many people in Bradford do “just get along” despite council policies that have led to divisions amongst people. David was one of the local anti-racists who joined last Saturday’s demonstration.

He explained, “If the NF march, they’ll divide communities. We have some of the worst schools and housing. Unemployment is high. On some of the poor white estates there is a misconception that local people have lost out on money. The NF are a travelling circus of right wing hard nuts. They go into an area and wind it up before going on somewhere else.”

“RIOTS ARE the voice of the unheard.” That quote from US black civil rights activist Martin Luther King in the 1960s gives a sense of how throughout history ordinary people’s anger has exploded. White working class people in Manningham rose up against poverty and oppression in a riot there in April 1891.

The Tory owner of the biggest factory in Bradford had provoked a strike among 1,500 workers. The police broke up the strike committee. Over 2,000 people came together to defend it.

There were two nights of bitter rioting. According to one description, people fought back with whatever came to hand, and “up to midnight the streets were crowded and the military were making charges with fixed bayonets”.

Afterwards over 60,000 people joined a protest march. The strike was eventually defeated. Some of the strikers went on to found the Bradford Labour Union.

It later became the Independent Labour Party-the forerunner of the Labour Party itself. Around 100 years later riots broke out across Britain in Oxford, Bristol, Tyneside, Slough and several other areas-all of them predominantly white. The cause was spiralling unemployment, indifference from politicians and repression by the police.

In April 1990 there were many riots outside town halls across England and Wales as councils set the first poll tax levels. They culminated in tens of thousands of people defending themselves from the police in Trafalgar Square in London.

The police laid siege to mining villages during the 1984-5 miners’ strike. They threw up roadblocks to prevent people moving round the country. They brutalised picket lines and solidarity marches. Rage at mass unemployment, the police and racism exploded 20 years ago. There was a major riot in Brixton in south London in April 1981. Between 3 July and 11 July of that year there were similar uprisings in Southall, Toxteth, Moss Side, and Handsworth.

There were smaller riots in many cities, including Leeds, Leicester, Southampton, Halifax, Bedford, Gloucester, Coventry, Bristol, Edinburgh and dozens of other places.

All involved black, white and Asian people. Toxteth, the biggest riot in July 1981, was home to most of Liverpool’s black population. But even the police admitted that most of the rioters were white. There were similar bitter riots by the unemployed in the 1930s. Strikes and riots were part of a wave of working class resistance in the years before the First World War.

IN OCTOBER 1993 the police spent over 1 million protecting the British National Party’s bunker in Welling, south east London, from a 50,000-strong anti-Nazi march.

The police injured hundreds of demonstrators, including the chief steward as she was trying to negotiate with them. Stephen Lawrence had been murdered not far from the Welling bunker in April 1993. The police arrested scores of anti-Nazis at Welling and charged many. They have yet to convict anyone for Stephen’s murder.

Babar faces court that could extradite him 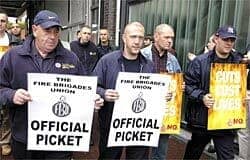 Crucial battle for firefighters on Merseyside

Hundreds of delegates will be coming from trade unions and colleges