“WE’VE GOT ministers in this area like Stephen Byers, Alan Milburn and Peter Mandelson. It would be brilliant if people who are a real socialist alternative could stand against these New Labour types.” So said Sarah, one of the 150 people who packed out the Royal Station Hotel in Newcastle last Thursday evening for the launch of the Tyneside Socialist Alliance.

Local labour movement figures, trade unionists, pensioners and refugees all turned up to hear an array of speakers. The local Labour hierarchy were in no doubt about the significance of the rally. They tried to pressure some speakers into dropping out and had ordered leaflets to be taken down from municipal noticeboards.

Socialist activist and former shipyard militant Kevin Flynn chaired the meeting. “We aim to establish a Tyneside Socialist Alliance and to put forward the idea of standing candidates in the general election as a real socialist alternative to New Labour,” he announced.

Kevin then introduced Shirley Winter of the Darlington Magnet strike. Shirley told how the workers were on the picket line for 20 months against a brutal employer, yet local MP Tony Blair did not lift a finger to help them. Alan McCombes of the Scottish Socialist Party explained how socialists north of the border were getting a hearing “raising an alternative to the free market and capitalism”.

Hilary Wainwright of Red Pepper magazine pointed out that any socialist alliance “has to be driven by the power that exists in the workplace and the community” and “rooted in the campaigns and struggles of working class people”. Pete Burnett, one of the organisers of the previous weekend’s very successful march in defence of asylum seekers, spoke of how pleased he was to be at the launch meeting.

He spoke of the feeling of “breaking new ground” and the importance of linking the defence of asylum seekers with the broader fight against global capitalism. Both Dave Nellist of the National Network of Socialist Alliances and John Rees of the London Socialist Alliance spoke about the crisis of New Labour. Dave Nellist talked about the volatility of British politics. John Rees said there was “a crying need for socialists to represent working class people”.

What really stirred the Newcastle meeting was when speakers drove home socialist arguments about direct action, about taxing the rich, about fighting for pensioners and about defending refugees. People knew that these are sharp arguments that can gain a hearing amongst thousands of working class people in Tyneside.

Sarah told Socialist Worker after the meeting, “It was really good to see the left getting together with a joint aim of opposing New Labour. The sort of things said tonight would mean a lot to ordinary working people.” The meeting certainly meant a lot to retired engineer and pensioner Hugh Johnson.

“I’ve always voted Labour,” he said. “But I’m really disappointed at the 75 pence insult from Gordon Brown. I’ve paid into the system since 1948! There’s many pensioners in Tyneside who feel the same way as I do. The Socialist Alliance would win support if they campaign to restore the pensions link.”

Falkirk campaign is off to flying start

SOCIALISTS HAVE a great opportunity to give the bitterness against New Labour a left wing focus in the forthcoming Falkirk West by-election in Scotland. A poll in last Wednesday’s Daily Record suggested that more than 40 percent of voters are waiting to see who resigning MP Dennis Canavan will back to become his successor.

Left winger Canavan was expelled from Labour two years ago after the party rejected him as a candidate for the Scottish Parliament and he stood as an independent. He romped home in the Holyrood election that followed. Canavan has now said he is going to resign his Westminster parliamentary seat in disgust at New Labour, triggering the by-election. Local care worker Iain Hunter is to stand for the Scottish Socialist Party (SSP) in the by-election. He resigned from the Labour Party two years ago over the treatment of Canavan.

An 80-strong SSP public meeting in Falkirk last week was addressed by MSP Tommy Sheridan. The meeting was packed with working class ex Labour supporters eager to talk left wing politics. There was real excitement at the prospect of raising socialist arguments in the by-election which may take place towards the end of next month.

The meeting provided a platform for local campaigns, including an official representative sent by workers at the threatened Ford Dagenham plant. The meeting was also addressed by local GP Kambiz Boomla, who won 4 percent of the vote as an LSA candidate last May.

AROUND 50 people attended the launch meeting of the Lancashire Socialist Alliance in Preston last week. At the same time four independent socialist councillors-Terry and Joyce Cartwright and Paul Malliband from Preston, and Andy Holder from Burnley-announced their intention to join the LSA.

The LSA intends to contest the Preston by-election, following the death of left wing MP Audrey Wise, if New Labour imposes a Blairite candidate. The LSA is also committed to standing a candidate against home secretary Jack Straw in Blackburn at the general election. The meeting was covered in the Lancashire Evening Post under headlines, “Left Group Aims To Loosen The Grip of New Labour” and “Breakaway Socialists Put NHS And Pensions On The Agenda”. 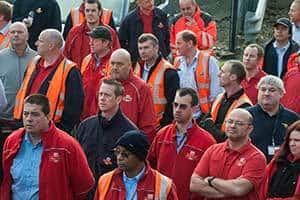 US establishment is split on war strategy