This article is over 17 years, 4 months old
Last Sunday’s general election in Portugal was won by the centre left Socialist Party. But it also saw significant gains for the radical left. Jorge Costa from the Left Bloc writes on the rise of an alternative to neo-liberalism and war.
Downloading PDF. Please wait...
Saturday 26 February 2005

The Left Bloc has just won its best election results ever. We won 6.4 percent of the national ballot and elected eight MPs. That compares with 3 percent of the votes and three MPs at the previous general election of 2002. In fact this time we were only 65 votes away from electing our ninth MP — we hope we can still do it in the recount!

The Left Bloc made its campaign around ten items that could be put into practice in the short term, in three months. These included pledges on employment, abortion rights, public services and tax. Abortion is still illegal in Portugal, so an end to prosecutions of women who abort was one of our key demands. Every year women die from complications from illegal abortion.

Some women have been also put on trial for having abortions recently. None have been condemned to prison, but they are still humiliated in court. We want to stop that.

The Left Bloc has been campaigning for the legalisation of abortion for a long time and collected 120,000 signatures calling for a referendum on the question. Employment was one of the main issues of the campaign. We called for an emergency plan to create jobs in public services, education and health.

We also stood against the privatisation of hospitals. The Socialist Party supports this sort of privatisation.

We also called for an end to our government’s involvement in the war in Iraq. Portugal has just 120 policemen there — we demanded that they be withdrawn. The war is a significant issue, though not as critical as it is in Britain. We’ve been the main force in the Portugese anti-war movement over the past two years, so we’re very well known on this issue.

The Left Bloc was formed in 1999 from a group of radical left forces. It very quickly grew, drawing in people from other left wing parties and many independents from the social movements and trade unions.

We are bringing a section of the working class back to politics, a section that had drifted away from involvement, since they did not recognise the Socialists or Communists as representing their interests.

Our presence has grown significantly in the main working class neighbourhoods in Portugal this time. You can see that in the election results and in the size of our meetings — 1,000 in Lisbon, 500 in Porto, 800 in Braga.

There is a very wide space for the radical left to talk to people and show that there is an alternative to neo-liberalism, warmongering and globalisation.

The right wing got their worst vote ever at these elections—36 percent—so there was a general shift to the left. But many people did not forget what the Socialists did the last time they were in power, so they turned to the radical left this time round.

We’ve been following Respect in Britain with interest and with solidarity.

Jorge Costa is the campaign director for the Left Bloc. Their website (in Portuguese): www.bloco.org 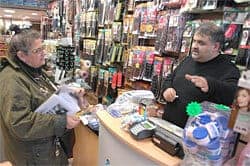 Respect steps up the pace in Waltham Forest and Preston