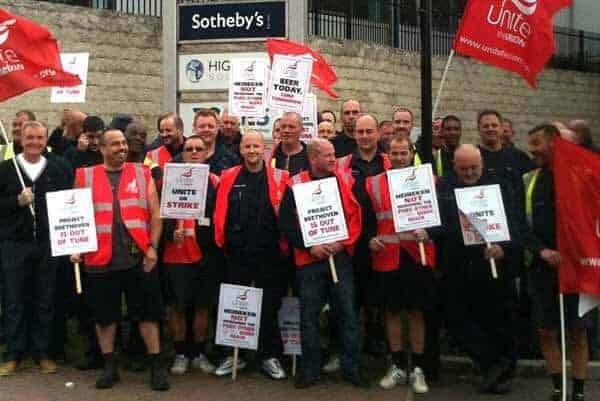 Workers at Kuehne and Nagel Drinks Logistics (KNDL), members of the Unite union, held a 24 hour strike that ended at 10am this morning.

At six o’clock in the evening the noise of car horns beeping in solidarity filled the air. Strikers said local bus drivers had been great in showing solidarity all day as they passed by.

Ahead of the strike they said they even got lots of support from the pubs they delivered to.

They did not want to be named for fear of future victimisation.

One striker told Socialist Worker that talks with KNDL broke down on Monday of this week “Because the company don’t know the meaning of meaningful consultation”.

“They’ve broken national agreements, and railroading through changes is not going to work,” he said, “Reports I’ve heard from other depots show the strike is solid. London is 100 percent. Manchester is 100 percent.”

There were also good turn outs on the picket lines in Hampshire and in Swansea. One striking worker in Swansea said, “Hauling 17-stone beer kegs around is no joke,”

“Trying to keep to impossible journey times is already causing serious safety issues. These changes will only make things worse.” He added.

Unite say bosses have breached an agreement over workers’ terms and conditions that could lead to job cuts.

The strike includes drivers, draymen and warehouse members. The Greenford picket said, “Draymen do a traditional job, workers here are proud of it. We want to protect working conditions and stop job cuts.”

Unite members have now begun a continuous work to rule and overtime ban. They have also threatened more strikes.