This article is over 11 years, 7 months old
Cabin crew at British Airways (BA) are fighting one of the most vicious bosses in Britain. They face attacks that will be familiar to millions of workers—job cuts, pay cuts and attacks on their union.
Downloading PDF. Please wait...
Tuesday 25 May 2010

Cabin crew at British Airways (BA) are fighting one of the most vicious bosses in Britain. They face attacks that will be familiar to millions of workers—job cuts, pay cuts and attacks on their union.

The right wing press and the Tories say that cabin crew are being irresponsible by striking because they will “wreck” the company.

In reality, it is BA boss Willie Walsh who is forcing this dispute, because he wants to smash the Unite union at the airline.

“Willie Walsh has been brought in to attack us,” Claire, a striking worker, told Socialist Worker. “He has no intention of making any deal.

“When our union came up with a plan to match the savings he demanded, he said he needed to make even more savings.

“The company has gone from one disaster to another since he arrived. Once he’s finished he’ll move on, and we’ll be left to pick up the pieces.”

Cabin crew were jubilant last week after Unite won an appeal in the high court allowing their strike to go ahead.

Workers are not “lemmings” mindlessly jumping off a cliff by striking. Walsh is the person trying to destroy their jobs.

He wants to bring in new workers on lower pay, with worse conditions and fewer rights. This would spell disaster for all workers at BA—and that’s why cabin crew are so determined to fight.

“We’ve got nothing to lose,” said Claire. “Papers like the Daily Mail keep saying we are ‘1970s militants’. But we’ve never asked for anything. They just keep taking things from us.”

Strikers chased off a Daily Mail reporter from their picket lines at Heathrow airport on Monday morning. They are furious at its lies about their dispute.

Bosses and the right wing media claim that cabin crew don’t support their union. Yet three times they have voted overwhelmingly for strike action.

Walsh is using the recession as an excuse to go on the offensive.

“The downturn is like manna from heaven for people like Walsh,” said Rob, another picket. “The cost of living has shot up. But the City would have the entire country on the minimum wage if it had its way.

“Just because there’s a downturn, it doesn’t mean workers’ rights have to go out the window.”

Workers know that this dispute is about attacking their union. “We’re seen as the last bastion of strong trade unionism at BA and that’s why Walsh is going for us,” said Terry, who has worked at BA for nearly 40 years.

“If we had lost our appeal against BA’s injunction last week, every trade unionist in the country may as well have given up and gone home.”

Simon agrees. “The cost savings to be made by breaking us are astronomical,” he said. “If Walsh beats us, he’ll go for other BA workers next.”

BA has dished out horrendous treatment to cabin crew.

“I have a friend who was off work because his dad died,” said Kim. “He got a letter from BA saying that ‘we regard this as taking industrial action’.

“Quite a few people have been off with stress and managers say it’s an excuse to take industrial action. But people still get ill, even during a dispute!”

Pickets know that BA is lying about the effectiveness of their action.

They pointed out that BA counts cabin crew who return to Britain on flights during the strike as working—even though many go straight to the picket lines.

Calling lengthy strikes has made Walsh, and his backers in the City, think twice about the dispute—which is why he ran to the courts to try and stop them.

There is a great danger that the union will not call more strikes after the current wave ends on 9 June, as it has said there will be no action during the World Cup.

This would give BA’s bosses breathing space to press home their attack.

On 12 June it will be 12 weeks since the first strike date on 20 March. The law says it will be entirely legal for Walsh to sack striking workers from this date.

Crew need to escalate the action to win quickly. Some may think that Walsh’s vile propaganda against them means that other BA workers don’t support their struggle.

But check-in and ground staff joined the picket lines in March. Many BA workers see that, if cabin crew lose, they will be next in the firing line.

Cabin crew must go to other BA workers and argue with them to stop work. If BA workers shut down Heathrow, they would force Walsh to retreat within days.

The stakes are high—for workers at BA and elsewhere.

As Kim put it, “Everyone is watching what’s happening here. If Walsh gets away with it, every other boss will follow his example.”

How you can support the BA strikers 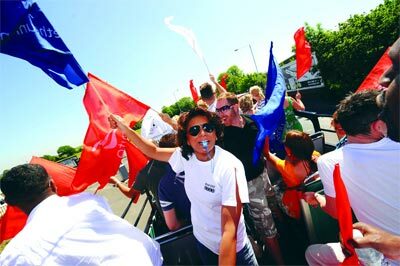