Bristol: another night of repression and resistance

This article is over 11 years, 3 months old
Bristol’s streets were again in flames as riots erupted for a second time on Thursday of last week.
By Tom Ramplin in Stokes Croft, Bristol
Downloading PDF. Please wait...
Tuesday 03 May 2011

Bristol’s streets were again in flames as riots erupted for a second time on Thursday of last week.

Over 200 young people from across Bristol gathered outside the “Telepathic Heights” squat to celebrate its defence in the previous week’s riots.

Police were relatively low in numbers and friendly at first, in an attempt to highlight their “community policing” role.

But this changed when officers tried to stop the street party growing.

The enraged crowd marched through Stokes Croft towards the city centre with their music playing. A line of riot police met them.

The dynamic of the previous week quickly returned. Police were showered with bottles as they started to push the crowd back up the road, striking them with batons.

A dozen riot vans appeared, and a line of police on horses charged through the crowd swinging their batons.

The number of rioters doubled in size to around 400 and fierce fighting raged for six hours. And, just as in the earlier riot, officers were repeatedly forced back.

There was little damage to local people’s property. The Tesco store attacked previously was now boarded up—so the crowd tried to get to the city centre to find other big chain stores.

The crowd was not a mindless mob nor simply anti-Tesco—they were anti-capitalist.

Over the weekend you might have thought that Stokes Croft was under military occupation—riot vans were on every corner.

A 17-year old was even arrested on suspicion of attempted murder of an officer.

And the cops’ efforts to appear as part of the community has made them seem like Dr Jekyll and Mr Hyde.

The numbers of local young people furious at the police, and the privilege and property police defend, increases daily.

It is clear that the working class of Stokes Croft have spoken again. 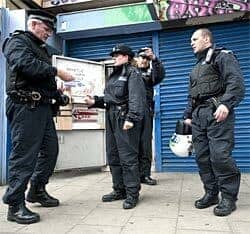 Police crackdown on right to protest