Other trade unionists joined them—including workers from the PCS union, Bristol university lecturers in UCU, NUT members and firefighters in the FBU union.

In the south west of England a cartel of NHS trusts is plotting to introduce regional pay—ditching agreed national pay and conditions.

The planned changes would make health workers compete against each other. These bosses want to increase working hours, reduce pay and sick pay, and abandon incremental pay rises.

Regional pay is also being introduced on the 111 Patient Line phone service (111 PL) that is due to replace NHS Direct next year. Workers in Bristol on the non-emergency health advice lines will be paid £8.20 an hour while they train and then £11.20 an hour.

Staff doing identical jobs in Newcastle will train on £6.20 an hour, just a penny above the minimum wage. They will only get £7.20 when trained.

The Bristol demonstration was called by a united health workers’ action group based in the city’s hospitals. Kathy Taylor, Unite health branch secretary, said, “We are all professionals and the cartel’s plans will have a terrible effect on the standards of patient care in the south west.

“Members are angry and demoralised. But union membership is increasing and the size of our mass meetings reflects the anger. We now need to ballot for industrial action as the way forward.”

Speakers at the rally emphasised that the health employers’ plans were aimed at softening up the NHS for privatisation. A representative of the Chartered Society of Physiotherapy told the rally that the NHS in the south west region had spent £206 million under its budget so far this year.

So the cartel plans are not about a lack of cash—but simply about making the service cheaper to run for private companies.

Unison member Salena, a senior nurse at Bristol Royal Infirmary, said, “A total assault is now taking place on the NHS. Every hospital union needs to call meetings, and non-members should join the union. The dispute must be escalated with a ballot for industrial action.”

The rally ended with a call to demonstrate in Bristol city centre on 5?December, the day of chancellor George Osborne’s autumn statement.

Rally to save Bolton’s A&E

“The Tories are cutting £20 billion from our NHS,” said Karen Reissmann from the Bolton Save Our A&E Campaign. “As well as the 500 job losses, the management at the hospital want to dismiss 1,430 nursing and 245 medical staff, and re-engage them on worse contracts.”

Martin Mulkin, an engineering worker in the Unite union, said, “The building up the road is bricks and mortar. “It’s the people who work there that provide the care, the services that makes the NHS.

“They provide the fabric that holds together our society. My two children were born at Bolton hospital. We will fight with every breath we have got to save it.”

Joyce Kellett, a councillor and member of the health scrutiny committee, said, “We need to fight and say we won’t accept any cuts whatsoever”.

Yasmin Qureshi MP also pledged “full support from all the Bolton Labour MPs” for the campaign. 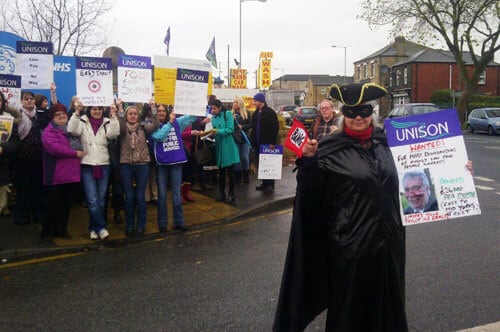