The British government has been very keen to give the impression that it cares about the appalling plight of Sri Lanka’s Tamils. Following demonstrations outside parliament by thousands of Tamils, foreign secretary David Miliband went to the capital Colombo and called for a ceasefire. Gordon Brown created a new post for Des Browne as “special envoy” to Sri Lanka.

The Sri Lankan government’s response could hardly have been more hostile. As soon as Miliband was back in Britain, he was denounced by the Sri Lankan defence minister. His visit was described as a “waste of time”.

Poor old Des Browne was refused entry to Sri Lanka, which makes you question whether he is an “envoy” to anything at all.

Labour’s inability to challenge the government in Colombo is another hideous example of their “ethical” foreign policy.

In the run-up to the present crisis, the Labour government has been one of the best friends of Sri Lanka’s hardline president, the butcher Mahinda Rajapaksa.

In 2006, then prime minister Tony Blair invited Rajapaksa for friendly talks. In June 2008 Gordon Brown shared a smile and a handshake in Downing Street.

It is ironic that Browne is now accused of trying to “interfere” in Sri Lankan internal affairs. When he was minister of defence, between 2006 and 2008, £12 million worth of British arms were sold to Sri Lanka. This included components for military aircraft and machine guns.

All the time Labour was cosying up to Rajapaksa he was pursuing a brutal agenda against the Tamils and the state that effectively existed in the north east which was run by the Liberation Tigers of Tamil Eelam (LTTE) – the Tamil Tigers.

The Sri Lankan government had launched an all out war on the Tigers in 1983. But it effectively recognised their control over the north and east with a ceasefire in 2002.

Rajapaksa came to power in 2005. He always intended to wage war against the Tigers.

In 2008 he unilaterally tore up the ceasefire agreement and enforced a vicious media ban to try and hide what he was doing from the rest of the world.

The British government stood idly by as hundreds of thousands of Tamils were displaced into government internment camps as the Tamil area was taken over by the army.

The British government thought it could wait until the Tigers were beaten and then step in to help negotiate a peace deal.

But Rajapaksa will not now listen to anyone who stands in the way of total military victory and the unimaginable humanitarian disaster that this is causing.

The British government dare not criticise him openly as it supported and armed him.

The root cause of the whole conflict lies with the conquest of the island by the British Empire and a rule maintained by dividing ethnic groups against one another.

Ever since then different opportunist Sri Lankan leaders from the Sinhalese majority have scapegoated Tamils to strengthen their own hold over the majority population.

Peaceful Tamil protests against discriminatory legislation were met by force. Tamils faced ethnic riots of increasing severity in 1958, 1977 and 1983. Many were killed and tens of thousands fled to the north or abroad.

It was this situation that led to the formation of the LTTE. It was the level of ethnic attacks that made the majority of Tamils – previously keen to be integrated in Sri Lanka – to support the LTTE.

This provided the basis for support for an independent state in the north and east of Sri Lanka.

The likely future after Rajapaksa’s war is best summarised by campaigning journalist Lasantha Wickrematunge, in a statement issued three days before he was murdered in January.

He said, “A military occupation of the country’s north and east will require the Tamil people of those regions to live eternally as second-class citizens, deprived of all self-respect.

“A problem amenable to a political solution will thus become a festering wound that will yield strife for all eternity.

“If I seem angry and frustrated, it is only because most of my compatriots – and all the government – cannot see this writing so plainly on the wall.”

It is the inspirational demonstrations outside parliament that offer us hope – not the shameful behaviour of the Labour government. This must be the longest “illegal” demonstration in British history.

We should support the Tamils in pushing to stop arms sales now, demand an end to the war, and campaign for an end to the oppression of the Tamil people. 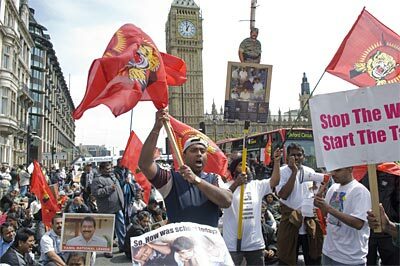 Tamils in London continue their protests against Sri Lanka’s war