This article is over 13 years, 3 months old
The financial crisis is spreading into the real economy and is set to hit already hard-pressed working class people even harder.
By Simon Basketter
Downloading PDF. Please wait...
Tuesday 07 October 2008

The financial crisis is spreading into the real economy and is set to hit already hard-pressed working class people even harder.

Business leaders warned that Britain is already in a recession on Tuesday of this week.

And signs are coming thick and fast that Britain, if not already in recession, is on the edge of it.

Workers at Land Rover’s Solihull plant were told that the plant will stop all production on Fridays – except for 4×4 vehicles.

British manufacturing shrank in September at its fastest rate since the last recession in the early 1990s. Production in manufacturing has fallen for a fifth consecutive month.

Domestic demand for manufacturers’ goods was particularly affected by the downturn in the credit, housing and construction markets, which led to an increase in customers cancelling or delaying orders.

The construction industry is losing jobs faster than at any time since 1997, as activity and new orders dwindled more rapidly last month.

The amount of construction work has fallen for each of the last seven months.

The scale of the decline would be starker were it not for some big set piece projects such as the Olympics.

One warning of the way the economy is heading is that at least 21 large companies have to raise major chunks of money between now and the end of the year, as some £49.6 billion of publicly traded debt comes up for renewal.

Since the companies also borrow directly from banks, the total shortfall they face may be close to double this. There is the real prospect of a number of firms going bust.

Companies are already struggling hard to keep their accounts in order, withdrawing money from their bank deposit accounts at a rapid rate.

Bank of England figures show that companies are digging into their credit facilities at the fastest rate since 1992, when the country was last in recession.

Furthermore, according to Britain’s largest corporate insolvency specialist, banks are likely to support retailers until the Christmas period, but a spate of insolvencies is likely to follow in the new year.

The insolvency specialist has 323 British retailers on its “critical watch list”.

They are defined as having a 70 percent chance or more of failing.

The money markets move at a faster pace then the real economy. But the warnings are clear.

The US has lost 760,000 jobs since the beginning of the year. And here already the number of people of out of work rose by 81,000 to a nine-year high in August.

There are already at least 1.72 million unemployed and there will probably be over two million by the end of the year.

Notably, at the end of the financial crisis in 1979, unemployment stood at 1.4 million.

Spiralling prices, bills and accommodation costs have meant we all paid through the nose while the economy was growing.

Now we are expected to foot the bill for the crisis.

We didn’t benefit from the boom. We need to fight hard so we don’t have to pay for the recession.

The nightmare of occupation in Afghanistan 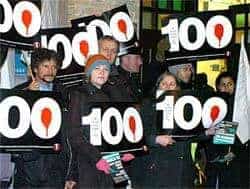