British government forced to apologise to Kenyans tortured in 1950s

In a momentous move the government has today, Thursday, agreed to compensate Kenyans tortured by the British during the 1950s Mau Mau war.

Foreign secretary William Hague apologised in parliament to Kenyan victims pledging that would make a payment to survivors totalling £19.9 million and would “support the construction of a memorial in [’s capital ] ” to victims of torture.

Following negotiations with the war veteran’s lawyers, the settlement now encompass some 5,228 people.

But once costs have been taken off, this leaves about £2,500 per torture victim in what the government declares a “full and final settlement”.

Lawyer for the victims, Martin Day, issued a statement saying, “It takes courage to publically acknowledge for the first time the terrible nature of ’s past in …The crimes were committed by British colonial officials… They include castration, rape and repeated violence of the worst kind.”

Hague said, “The British government recognises that Kenyans were subject to torture and other forms of ill treatment at the hands of the colonial administration.

“The British government sincerely regrets that these abuses took place, and that they marred ’s progress towards independence.”

Dan Thea, from the Mau Mau Justice Network, which supports the veterans’ claim, told Socialist Worker, “This has been a wonderful job by the veterans, the fulfilment of a long struggle after a long wait of 50 years.

“We finally have acknowledgement, a public apology and compensation.”

But Hague is determined that the government should avoid its full responsibility to victims of British colonialism.

Later in the statement he added, “We continue to deny liability for the actions of the colonial authorities.”

Hague made no mention of the colonial documents that came to light during the trial, which the British government had hidden in a warehouse since independence. These referred not only to but more than 30 other colonies.

He went on to say that no one should see the settlement as forming a precedent for any other colony.

Dan added, “Our one regret is that this agreement has left many more veterans out of the picture, who deserve similar compensation.

“It is important that no one forgets the Kenyan people who suffered during the Emergency. And that imposed 70 years of brutal colonial occupation on the country.” 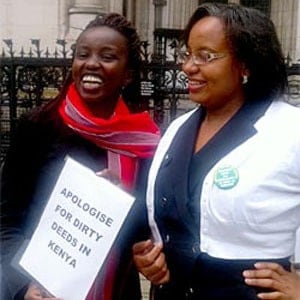