This article is over 15 years, 3 months old
The chancellor’s unpopularity with voters is rooted in the spiralling personal debt caused by his economic policies, argues Graham Turner
Downloading PDF. Please wait...
Saturday 07 October 2006

Gordon Brown is no longer seen as the automatic choice to succeed Tony Blair. That may seem puzzling. The prime minister routinely lauds his neighbour as Britain’s best ever chancellor, and yet fails to endorse his succession.

As a recent poll revealed, there are doubts over the electability of Brown. The economy is not proving to be much of vote winner. The hysteria generated by Blair’s “war on terror” may still let John Reid in through the side door.

That’s because more and more voters are beginning to count the cost of the spiralling debt burden that has driven the economy throughout Brown’s tenure.

Britain is more in debt than ever before, sinking in a sea of red ink. Personal sector debt hit a record 161 percent of disposable income at the end of June this year. That is far above any other G7 country. The US, widely lambasted for excessive consumerism, has a comparable debt ratio of 134 percent.

New Labour came to power with Brown promising “no more boom and bust” – a reference to the dark days of negative equity and record home repossessions. But even under the Tories, the debt burden was never this bad, peaking at a comparatively modest 112 percent in 1991.

It seemed all so different in the heady aftermath of the May 1997 landslide. Five days after the election, Brown and his advisers went to 10 Downing Street.

In a pre-emptive strike to reassure a sceptical City, the Bank of England was granted full independence over monetary policy. The move is still be seen by many economists as a masterstroke, and fundamental to sustaining the recovery from recession in 1991.

But in reality, it set the stage for the borrowing boom now causing so much misery. The Bank of England was stripped of its power to supervise the financial system. Instead the bank’s Monetary Policy Committee (MPC) was charged with the responsibility of keeping inflation between 1 and 3 percent. And it would be left with just one weapon to hit its target – interest rates.

So long as inflation remained under control, there was little the MPC could do as borrowing surged and house prices rocketed. It was beyond the MPC’s remit to even attempt to rein in the rapid increase in debt.

Inflation was being kept under control – mainly because of the rapid push by so many companies into China and other countries offering cheap labour. In previous decades, a surge in borrowing might ordinarily be checked by a rise in inflation. But not in the brave new world of globalisation.

It is the rapid pace of globalisation that has sown the seeds of today’s debt misery. So long as consumers benefited from cheap imported goods, the government was happy to turn a blind eye to the surge in debt levels.

Indeed, without the rapid increase in borrowing, the economy would not have expanded anywhere near as quickly and unemployment would be far higher. The flipside of globalisation and, of course, the dismantling of union power endorsed by Blair and Brown, has been sluggish gains in real wages.

That is the folly and contradiction of today’s free market doctrine. Companies justify the persistent downward pressure on real wages, and their right to relocate in attempt to squeeze production costs. But if wages do not rise quickly enough, it becomes impossible for consumers in the West to consume all the output produced.

The failure to control house prices and the growth of credit has also contributed to rising inequality. The Bank of England detailed the uneven distribution of debt in its winter 2003 bulletin.

The report found that those on incomes of less than £4,500 had the most difficulty coping with their debts. Within all income groups above £17,500, the proportion of borrowers reporting debt to be a problem was below the national average.

It found that 20 percent of borrowers living in rented local authority housing and 18 percent of those living in housing association accommodation found their debt to be a heavy burden.

By contrast, just 4 percent of debtors living in their home with a mortgage were experiencing difficulties with their loans.

The bank was under no illusion as to the reason for this inequitable distribution. Borrowers living in rented accommodation, it argued, “would have little or no room to refinance secured debt on favourable terms, and would be more vulnerable to changes in interest rates or incomes”.

It is small wonder that so many of Labour’s core voters fail to resonate with New Labour’s claim to have transformed the economy. Iraq will be Blair’s folly. Record debt will Brown’s legacy. And it may cost him the job he craves.

Graham Turner works for an economic consultancy and is a member of Respect in Tower Hamlets.

Activists gear up for day of protest on May Day 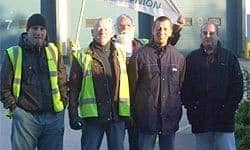 Strikes at First buses show the mood for action