This article is over 13 years, 9 months old
Gordon Brown has declared war on many of his own voters by abolishing the 10p starting rate of tax.
By Simon Basketter
Downloading PDF. Please wait...
Tuesday 08 April 2008

Gordon Brown has declared war on many of his own voters by abolishing the 10p starting rate of tax.

While some of the poorest workers in Britain are now forced to pay hundreds of pounds more in tax, in the London boardrooms of the world’s richest companies there was joy as corporation tax was slashed.

This is Labour’s third cut to the tax on profits since 1997. Under Margaret Thatcher’s Tory government, corporation tax was 52 percent. This week Brown reduced it from 30 percent to 28 percent – the lowest of the G7 leading industrialised countries.

New Labour’s double standards make a mockery of its claim to be ‘lifting people out of poverty’ and has sent a wave of anger among Labour supporters, even those who think of themselves as loyal to the party.

Millions of Labour voters rightly believe that the tax system should be used to help the poorest by redistributing wealth from the rich to the poor.

The abolition of the starting rate will hit young workers without families particularly hard. Those earning less than £18,500 a year stand to lose up to £232 a year – a lot of money when you are scrimping to put food on the table while paying the rent.

Brown’s startled response to the political furore over tax has been to claim that his regime of tax credits and child tax credits will make up for the shortfall. But he knows this is a lie.

Lack of information and a cumbersome application process means that only 40 percent of those entitled to tax credits claim them – dropping to just a quarter of single people on low incomes. Those under 25 without children are not even eligible.

Those who do manage to obtain tax credits often find that they become caught in a trap where any extra money they earn can be wiped out by taxes.

The Treasury’s own figures show that 1.9 million people – including about half of all pensioners – whose income exceeds £6,500 a year are allowed to keep just less than 40p of every extra £1 they earn.

When the total of all deductions, including national insurance, are taken into account those people are paying rates of tax on extra earnings of between 60 and 90 percent.

This week’s tax changes will mean a million more people are caught in this trap. The number affected is equivalent to more than the population of Birmingham and Manchester combined.

However Gordon Brown’s world is full of stark contrasts. Multi-millionaire Labour donor Lord Sainsbury showed how New Labour is working for the rich. Last week he transferred most of his 8 percent stake in the Sainsbury’s supermarket to a company he controls, in the process avoiding a £27 million tax bill.

Yet even Brown’s new 28 percent corporation tax is too much for some top firms to bear. The top 50 companies in Britain have an average effective corporation tax of just 22 percent.

Already those at the bottom end of the economic scale are struggling as they pay a bigger proportion of their wages on essentials such as food and fuel, which have shot up in price.

By limiting pay rises for public sector workers to below inflation the government is making the pain far worse, creating a seething political anger.

Last week the Experian credit agency revealed that 5.1 million households are close to not being able to pay all their bills, including mortgages. Three out of four of those are in Labour constituencies. That’s around eight million voters.

No wonder that even the government’s junior ministers last week made ‘dangerous murmurings’ about the abolition of the 10p rate of tax and the need for fairness.

However the ‘rebellion’ was short-lived and government whips brought MPs back into line without offering the slightest concession. 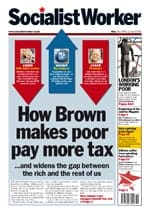