Brown’s TUC speech goes down like a lead balloon

This article is over 14 years, 4 months old
Gordon Brown took a mixture of neoliberal waffle and soft racism to the TUC’s annual Congress in Brighton this week – and got a frosty reception.
By Simon Basketter, reporting from Brighton
Downloading PDF. Please wait...
Tuesday 11 September 2007

Gordon Brown took a mixture of neoliberal waffle and soft racism to the TUC’s annual Congress in Brighton this week – and got a frosty reception.

Brown began by lecturing delegates on the “task” ahead. This is all about acquiring global skills to compete in the global economy, he said:

“China is producing half the world’s textiles, but also half of the world’s computers, 60 percent of all mobile phones and digital cameras and 80 percent of some of the more sophisticated electronic goods.

“And when it comes to our members’ jobs, the most important fact is this – the world has seen a 400 percent rise in the ranks of unskilled workers, and just think about what that means for our need to acquire skills.”

Brown’s solution to all this is to push for a low wage economy.

There was nothing on offer for those hoping for more than a change of tone from Brown compared to his predecessor Tony Blair. And the minimal amount of substance in his lengthy speech was thoroughly reactionary.

Brown says he has 654,000 job vacancies that are all going to be filled. “The challenge is to match workers who need jobs with jobs that need workers,” he said.

What that means is partnerships with multinational corporations for low paid jobs.Young people and lone parents are to be guaranteed an interview – but they aren’t guaranteed to keep their benefits.

Brown said “Britain” and “British” 45 times during his speech. Ominiously he annnounced that migrant workers will face language tests before being allowed entry to the country.

Tony Woodley, joint general secretary of the Unite union, called Brown’s performance “the worst and most uninspiring speech by a Labour leader for years”.

Scores of delgates from the PCS, UCU, CWU and POA unions held up posters reading “Fair pay for public servants” in a protest against his 2 percent limit on public sector pay rises.

But delegates gave the prime minister a mere 30 seconds of applause. Perhaps more significantly, trade union leaders admitted that they too felt dismayed by the speech.

“I wish the prime minister would listen rather than lecture,” said Colin Moses of the prison officers’ POA. “I never thought I would hear such a speech from a Labour prime minister.”

Paul Kenny, the general secretary of the GMB, said the union was under pressure from members to disaffiliate from the Labour Party altogether:

“They are asking us why we sign a cheque worth £2 million every year for the Labour Party, yet we can’t get basic rights for agency workers.”

Kenny said there was big gap between Brown’s rhetoric and the reality:

“He said nothing about fat cats in the City shovelling cash into the boots of their 4x4s, nothing about private equity and nothing about giving trade unionists the same rights as their counterparts in continental Europe.”

“But it is totally inconsistent for him to talk about this while cutting civil service jobs and cutting real-terms pay.”

“He delivered lots of good news in an attempt to sweeten the bitter pill that was the message about pay discipline,” he said. “Perhaps he hasn’t yet gauged the real feeling of public service workers having to bear the brunt of government cost-cutting.”

“I believe there will be political as well as industrial and economic consequences of imposing staged below-inflation pay settlements.”

Anger at pay restraint may lead to coordinated strikes 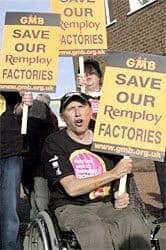