Health workers are being treated like dirt by Gordon Brown’s government. We face pay cuts, privatisation and job losses.

The union has organised a day of action over pay on Wednesday of this week.

From October through November, the Unite union balloted our members in health on industrial action.

And quite rightly, our members voted yes.

Unite did a brilliant job in campaigning for the outcome we needed.

There will be demonstrations in London, the north east of England, and the south west.

I’ve heard reports of a brilliant meeting of Scottish activists to plan for action. This is a real step forward.

For many groups the action will include not attending meetings or not dealing with emails or phone calls, unless these are directly related to patient care, or not working additional hours.

We can make the day of action part of the process of building collective strength and organisation in the union. This is part of the fight against the government’s public sector pay cuts.

Is it enough? No! Activists know that we will need strike action to win this one – and even brief action can have an enormous impact.

Strike action by Unite members can also send a powerful signal to the government that we mean business and open up powerful opportunities for a joint fight with other trade unionists next year.

A real fear, though, is that union officials might be looking for a way out.

Our head of health told a health sector national committee meeting two weeks ago all about the difficulties of strike action.

An executive council meeting last week was told how great it was to see Labour being so supportive of workers.

It’s not clear that the commitment is there to challenge Brown by following through with our members’ mandate for strike action.

Our joint national committees, across the Amicus and T&G sections of Unite, resolved to push ahead with action up to and including strike action if we don’t get adequate progress by January.

Reps and activists should be fighting to make strike action in January a reality, by raising this in workplace and branch meetings.

December branch meetings could send motions into the next health sector national committee.

We’ve got a weak and unpopular government. Unite members in health – for the first time most of us can remember – have shown our willingness to stand up and fight for what’s right.

We have to build on the excellent work that’s been done to date.

Care home nightmare: this could be the NHS's future

Uprising at Downhills school against privatisation 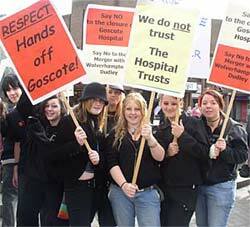 Privatisation plans will devastate the NHS