In up to 65 seats in England and Wales these candidates, like the 72 Scottish Socialist Party candidates, will be challenging the neo-liberal, pro-privatisation stance of the major parties at the general election. At the Bristol meeting 33 people voted for teacher and trade union activist Brian Drummond to stand against New Labour minister Dawn Primarolo in the Bristol South constituency.

Brian said it was time to rebuild the socialist and trade union movement as one ‘that fights for working class people’. Brian told Socialist Worker what an exciting time it is for socialists: ‘This is the time to put socialism on the map in a way we’ve never done before.’ Fellow teacher Chris Carter was unanimously voted to be Brian’s election agent. He said, ‘As an ex Labour Party member, the unity achieved in the Socialist Alliance is really important to me.

‘We want to gather round us not just those already committed to left wing politics, but trade unionists, disillusioned Labour voters and many others.’ Colin Patience, a UCATT building workers’ union representative on the local trades council, urged the Socialist Alliance to get behind the campaign to stop the privatisation of council housing.

The meeting also set a target to raise £25 from each of 200 supporters to fund the socialist election campaign. On the night a collection raised £215 from the people at the meeting.

There was a buzz of activity as people volunteered to run Socialist Alliance stalls and organise for the day of action for rail renationalisation. There was a similar atmosphere at the Brent Socialist Alliance meeting in west London on Sunday which selected Anne McShane to stand against New Labour Home Office minister Paul Boateng in Brent South.

Labour Party member Peter Cull came along to the meeting to find out more about the Socialist Alliance. He said, ‘I joined the Labour Party in 1960. I detest what New Labour is doing now and I intend to leave the party. When I found out that Labour were privatising council housing it frightened the life out of me. It seems the Labour Party’s policy is to privatise everything-air, tube, health, everything.’

ANNE McSHANE is the prospective parliamentary candidate for Brent South. She is a council worker and a member of the UNISON union. ‘The Socialist Alliance can provide inspiration to both people already involved in politics and those who are brand new. We can deal a strong blow against the cynics who say nobody is interested in politics. We need to reach those working class people who feel disenfranchised by the mainstream politicians. We have a job ahead of us to convince people that this time round there is an alternative, that people don’t have to waste their vote.’

TERRY RODGERS was selected as the prospective Socialist Alliance candidate for Tynebridge in the north east of England last week.

‘I am 74 years old. I have been active in politics since I was a 16 year old apprentice at the Vickers factory. After the Second World War I joined the Labour Party and became active in the draughtsmen’s union. From 1955 until I retired at 60 I was at the big NEI Parsons turbine company. We were highly organised and militant, and I was involved in leading many disputes. Today I’m active in the pensioners’ movement and the MSF union. New Labour has effectively eradicated the traditional loyalty of masses of its supporters. Pensioners, many who are lifelong Labour voters, are saying ‘never again’ to voting Labour. Hundreds of thousands of workers are suffering the effects of PFI. The Socialist Alliance says we need to organise and fight. What is happening here is part of what is happening globally.’

GRAHAM HELLAWELL has been selected to stand in the Huddersfield East constituency. He is a voluntary worker for Kirklees Refugees and Friends Together, working to help refugees and asylum seekers. ‘It is crucial to stand socialist candidates in the general election to put up a fight against Tony Blair and show working class people there is a choice. I’m standing against the current Labour MP, Barry Sheerman, who has openly supported tuition fees and the abolition of the student grant. We are going to lobby his surgery on 16 March and make the fight for free education a central part of our campaign.’

‘Tony Blair and New Labour have pandered to corporate interests and attacked working people. They are asset-stripping the NHS and state education through PFI. The public transport system is a disaster. And they’ve brought in draconian laws against those seeking asylum. You can’t vote New Labour. The Socialist Alliance can be proud of the fact that it has got people to unite who haven’t traditionally worked together. It has done this by emphasising what we have in common-the principles of an equal distribution of wealth, and of a society that will be no longer be run by the rich and for the rich.’
MARK THOMAS, TV comedian and investigator

A four-page Socialist Alliance brochure is now available for use at stalls, meetings and other activities. It costs £50 per 1,000 copies, and must be ordered and paid for in advance.

Funds needed for the fight

The National Network of Socialist Alliances in England has launched a national appeal to raise £100,000 to help fight the coming general election campaign. Raise the appeal in your union branch, trades council and campaigning organisation. Get individuals to give money.

By Martin Chapman, chair of the Welsh Socialist Alliance

Delegates from across Wales met last Saturday in Rhayader, Mid Wales, for the annual conference of the Welsh Socialist Alliance.

The Alliance has more than doubled in size over the last year, with new branches in Neath, Port Talbot, Bridgend, Caernarfon and Gwent. These join branches in Cardiff, Merthyr Tydfil, Swansea and Wrexham.

Delegates discussed the importance of building an active, wide membership of the Alliance, especially in the run-up to the election. The conference committed itself to continued campaigning in Wales, especially against PFI projects and for the renationalisation of the rail. 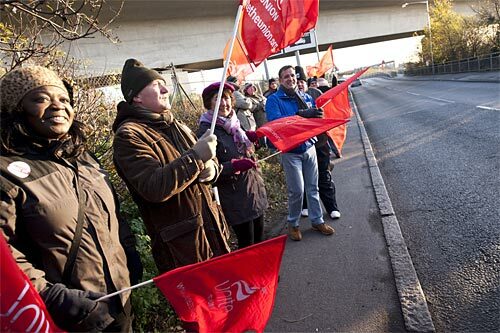 This is a class fight, say Unilever strikers

Banking on fighting back at Barclays

Strike ballot at First Bus in Bristol over sackings