This article is over 13 years, 6 months old
Hundreds of thousands of workers across Britain are fighting for decent pay, and bus workers in London are set to join them. Workers have resoundingly kicked out pay offers at most of the major bus companies.
By Esme Choonara
Downloading PDF. Please wait...
Tuesday 22 July 2008

Hundreds of thousands of workers across Britain are fighting for decent pay, and bus workers in London are set to join them. Workers have resoundingly kicked out pay offers at most of the major bus companies.

This raises the prospect of London-wide strikes taking place on the buses for the first time in many years.

Bus workers were set to take their campaign to the capital’s Tory mayor Boris Johnson on Thursday of this week with a march on City Hall.

With living costs rising and Gordon Brown determined to hold down wages, pay is becoming a burning issue for millions of workers in the public and private sectors.

Public sector unions are building towards major strikes in the autumn.

They could follow that up with a three day strike in the autumn. Scottish local government workers are due to announce the result of a strike ballot which could see action as early as August.

Some 12,000 Network Rail workers are set to strike this weekend over pay and conditions (see page 15).

The NUT teachers’ union national executive has agreed to hold a strike ballot in October.

In the NHS, the Unite union is campaigning against the pay curbs and building towards industrial action. There is pressure within the Unison union to renegotiate a three-year below inflation deal in health.

The anger over pay on the buses is reflected in the growing unrest across the private sector.

A high profile strike by Shell tanker drivers recently showed strikes can win pay rises. Workers at Argos are in the midst of a powerful series of strikes over pay (see page 4).

On the London buses, drivers in the Unite union at Arriva North have thrown out a pay offer of 4 percent by the huge margin of 1,366 to 70.

This follows similar votes by drivers at Arriva South, Metrobus, Metroline, First Capital and First Centrewest – all of which have voted by over 90 percent to reject pay offers in the last few weeks.

This mood is not just restricted to the drivers. Supervisors at Arriva North and South voted by 141 to eight last week to reject an offer of 4 percent.

Mr Pathan, a driver from Arriva North, told Socialist Worker, “Of course pay is a big issue. Just look at the rising prices – bread has gone up twice already this year.

“Fuel bills and the cost of housing are going up. And wages are falling further and further behind.

“That’s why drivers rejected 4 percent – living costs are rising by much more than that so where are the drivers supposed to find the money to pay their bills?

“The 5 percent the union is asking for is not even enough to match this.

“The bus companies can all afford to pay more – they are making huge profits. Arriva made £128 million profit last year. Paying the drivers would cost a tiny part of this sum.”

There are more than 30,000 bus drivers in Unite in London – potentially a very powerful group of workers.

“We need to see strikes across London – we need to show the power that bus workers have,” says Mr Pathan.

Union members at several companies have already indicated that they are willing to strike over pay.

At Metroline a consultative ballot is due to be held in all the garages on Friday of this week.

Amanda, a driver at Metro-line, told Socialist Worker, “The mood in the garages is very confident. People expect to be going on strike.”

The current ballots are part of Unite’s campaign to secure a London-wide higher rate of pay and better conditions at work at all bus companies.

The issue of pay is hitting a nerve outside London too.

A driver in Mid-Sussex told Socialist Worker, “Pay is an issue for all of us, especially at the small companies with weak or no union organisation. I see a growing anger where I work – as things get tougher for people.

“We earn around £8.15 an hour at my place so people are working huge amounts of overtime just to make ends meet.

“It’s not unusual for drivers to be working 70 hour weeks. Everyone is tired all the time.It’s getting like this for everyone – not just on the buses.” 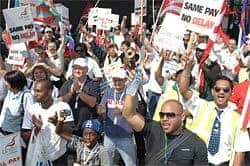