Bush is ready to bomb Iran

This article is over 16 years, 4 months old
The US is ratcheting up the pressure on Iran with the clearest signs yet that George Bush’s administration is planning a military attack on the country’s fledgling nuclear programme.
Downloading PDF. Please wait...
Saturday 11 March 2006

The US is ratcheting up the pressure on Iran with the clearest signs yet that George Bush’s administration is planning a military attack on the country’s fledgling nuclear programme.

John Bolton, US ambassador to the United Nations (UN), went into explicit detail about what such an attack would entail to a group of British MPs visiting Washington last week.

“We can hit different points down the line. You only have to take out one part of their nuclear operation to take the whole thing down,” said Bolton, according to Labour MP Eric Illsley.

Bolton is a hardened neo-conservative who was installed as UN ambassador by Bush in May last year.

On Sunday, Bolton spoke at the American Israel Public Affairs Committee (AIPAC), an influential Zionist organisation that has been lobbying hard against Iran. “The longer we wait to confront the threat Iran poses, the harder and more intractable it will become to solve,” he told the rally.

The US would use “all the tools” at its disposal to stop Iran’s nuclear programme, he added, threatening “tangible and painful consequences” against the country if it continues to resist Bush’s diktats. These threats come in the wake of a US state department announcement on Thursday of last week that it was putting together a special office to deal specifically with everything to do with Iran.

The propaganda war currently being waged against Iran is identical to that conducted by the White House in the run-up to the invasion of Iraq.

Just like three years ago, lurid headlines, distorted intelligence, spurious allegations of weapons programmes and a diplomatic charade at the UN are being orchestrated to create the climate and excuses for a US-led attack on an oil-rich Middle Eastern country.

According to Time magazine, Bush plans to present CIA-sourced “evidence” to the UN that Iran is designing a nuclear bomb – just like former US secretary of state Colin Powell presented “evidence” of Iraq’s non-existent weapons of mass destruction to the UN in February 2003.

The British government is less keen on a military attack on Iran than the White House – but New Labour could still decide to throw its weight behind an attack.

A strong turnout for the Stop the War demonstration next Saturday in London could make all the difference in preventing the British government from hurtling further down the road to a disastrous and deadly conflict with Iran. 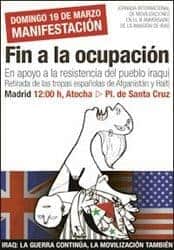