This article is over 11 years, 3 months old
Cabin crew at British Airways (BA) have voted by more than 83 percent for strikes.
By Sadie Robinson
Downloading PDF. Please wait...
Tuesday 29 March 2011

Cabin crew at British Airways (BA) have voted by more than 83 percent for strikes.

It is the fifth ballot they have held—and every single one has delivered resounding support for action.

The vote in the latest ballot, which closed on Monday of this week, is an even higher yes vote than their previous ballot in January—where the vote for strikes was 78.5 percent.

The message could not be clearer. Unite’s general secretary Len McCluskey must name strike dates now.

He should use the strong vote, and the momentum of Saturday’s TUC demonstration, to push the struggle at BA forward.

“We should rule nothing out.”

The ballot result at BA gives McCluskey the perfect opportunity to give a lead in the fight to defend jobs, working conditions and union rights.

The turnout in the latest ballot was a fantastic 72 percent.

And there has been a clear shift towards support for strikes.

Some 409 fewer people voted no this time than last, while 60 more voted yes.

Cabin crew have been in dispute since November 2009, when BA imposed job cuts without negotiation with the union.

Since then the workers have shown incredible determination.

bullying, they have shown time and time again that they want to fight back.

They have struck for 22 days in total.

Each time there was a fantastic spirit among strikers and widespread support from other trade unionists.

Unite declared January’s ballot result invalid after BA bosses asserted to the Electoral Reform Society that it was unlawful.

The union can’t repeat this mistake. It must use the vote, ride on the momentum of Saturday’s protest, which many cabin crew attended, and call a programme of strikes to force the bosses back.

Gas bill ‘cut’ is still a rip off

Seize the chance to rage at job losses on 16 May 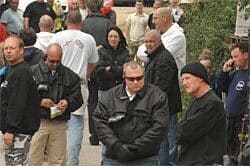