Walsh is in the process of ripping up cabin crew workers’ existing terms and conditions and imposing new ones without agreement with the workers’ Unite union.

The changes include pay cuts and freezes, the abolition of allowances, and a jobs cull.

Walsh has stripped £400 million of costs from BA in the past six months and has already extracted a pay cut from BA’s pilots.

The cabin crew in the Unite union are balloting for strike action over the cuts that were imposed on 16 November. The ballot closes on 14 December and, if staff vote in favour of industrial action, the first strike could start a week later on 21 December.

Walsh is talking tough about the strike. He doesn’t want a repeat of the 2007 dispute when he was forced to settle with the cabin crew workers. The best response will be a resounding yes vote in the strike ballot.

Spanish airline Iberia, which is in the process of merging with BA, agreed to a 4 percent rise for cabin crew last week.

Workers at the airline had planned to strike from 30 November to 2 December over the airline’s attempt at a wage freeze, but the company backed down. 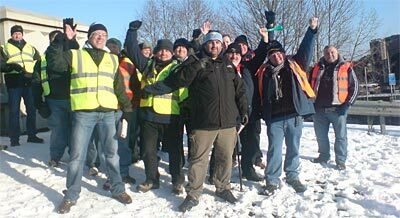 Unions and activists beat back the BNP