This article is over 11 years, 2 months old
£50,000 for Tory ‘stylist’ David Cameron has handed hundreds of thousands of pounds of our money to his Tory friends.
Downloading PDF. Please wait...
Tuesday 09 November 2010

David Cameron has handed hundreds of thousands of pounds of our money to his Tory friends.

He has put his “image consultant” on the civil service payroll—at an estimated cost of £50,000 a year.

This comes on top of his website manager and personal photographer—and a stylist for his wife, Samantha, to help her get dressed. Cameron has handed civil service jobs to 26 Tory aides since May.

The Tories say Cameron’s image consultant will maintain his “voter-friendly image”. You couldn’t make it up.

He used the figure in his budget statement to justify attacks on benefit claimants.

But a Daily Telegraph investigation could find only three families that claimed £104,000 a year—out of 4.5 million claimants.

And after contacting local councils in London, only five councils responded saying they had any families claiming over £1,000 a week—168 families in total.

Traveller families at the Dale Farm site in Essex have won a high court battle against Basildon district council.

The council had refused to pay compensation after details regarding their children were revealed to the press.

A judge has ruled that the council acted unlawfully when it rejected a local government ombudsman’s recommendation to pay the families £300 each for human rights breaches.

The council has been ordered to pay the travellers’ legal costs and 50 percent of the costs incurred by the ombudsman in defending his recommendation.

The Travellers are continuing their battle to remain at the site.

The children of Derry will be disappointed this year after Scrooge fire bosses slashed their Santa.

Every year the firefighters volunteer to take Santa to almost 200 primary schools in the Northern Irish town.

But this year the bosses have cut it – because they don’t want to pay the cost of the diesel.

The Tories are going to cut more than 100,000 jobs in the civil service as part of plans to cut half a million public sector workers.

Cabinet secretary Gus O’Donnell told MPs last week that some departments “have already started voluntary redundancies – there will be recruitment freezes.” He said compulsory redundancies would “be part of the answer”.

O’Donnell has brought in privateers to advise departments how to make the cuts. The unions will need to strike to defend jobs and services. 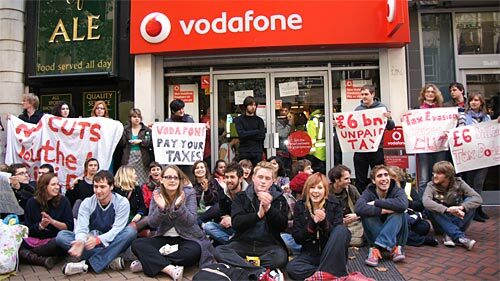