This article is over 11 years, 8 months old
The open class enemy is poised to enter 10 Downing Street.
By Simon Basketter
Downloading PDF. Please wait...
Tuesday 11 May 2010

The open class enemy is poised to enter 10 Downing Street.

Any idea that the Liberal Democrats joining David Cameron’s Tory government will soften the blow for working class people is wrong.

The Lib Dems had only one distinctive policy in the election – that they wanted to be honest about how much “needed” to be slashed from the public sector.

Whether Kenneth Clarke or Vince Cable is the chancellor, both will be set on cutting the deficit “in the national interest”. What that means is hundreds of thousands of jobs losses and a devastating decline in the living standards of working class people.

The Tories and their friends in the right wing press have argued that they had a right to form a government. They say that the 36 percent of people who voted for them means that David Cameron should be in power.

In fact, it reflects the arrogance of the ruling class belief in their birthright to own and direct and control.

The flurry of secret talks between the mainstream parties reflects an important truth about British “democracy”. The real decisions are made behind closed doors – and the mass of ordinary people are excluded from the process.

That’s why none of the parties has told the truth about the onslaught they are about to launch on the public sector.

Many working class people will be horrified at the return of a Tory government. They are right.

Labour privatised and cut and pandered to the bosses. It launched imperialist wars in close conspiracy with the US ruling class.

But this government will redouble those attacks with a fresh spring in its step. It will seek to target every public service, bear down on workers’ rights, and boost the rich at every turn. Attacks on migrants and people on benefits will now become reality in terms of policy.

Anyone who voted for the Lib Dems in the belief that they were an alternative to the neoliberal consensus must now realise that a neoliberal with the promise of a referendum on the voting system is still a neoliberal.

Gordon Brown’s failure to either win a majority Labour government or lash up a coalition with the Liberals was not because his commitment to the free market was lacking. Rather, 13 years of New Labour have served a purpose.

They have succeeded in rehabilitating the bosses A-Team – but only enough that they need the Lib Dem C-Team to prop them up.

It was worth noting that it was not pandering to racism, privatisation and more money for the bankers that saw nearly every left wing Labour MP strengthen their vote.

Labour held onto its core vote because its core vote hates the Tories. But for millions of working class people there seems little difference between the cuts of New Labour and the cuts of the old Tories and old Liberals.

This is not the return of Margaret Thatcher. David Cameron and his mini-me Nick Clegg are weak and unsure. That does not mean that they won’t be vicious. But it does mean that they can be beaten.

As they justify every cut in public services, every pension wasted and every new worker on the dole with calls to support the “national interest” we must redouble our efforts to organise the resistance which can defend our class interest.

That means activists throwing their weight into building solidarity with every piece of resistance against the austerity – now. Cabin crew at British Airways, who are fighting against bullying boss Willie Walsh, will be out on the picket lines for 20 days over May and June.

Every trade unionist should back them.

It also means building permanent, vibrant networks of resistance in every workplace and community. A key step to making that a reality is the Right to Work conference on 22 May.

The bidding war over cuts 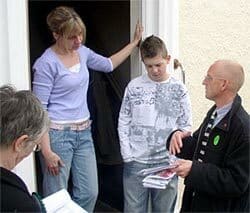