Campaign against Climate Change vigil: up all night for the planet

This article is over 11 years, 8 months old
Around 200 people attended a Campaign against Climate Change vigil in London on Saturday night.
By Jonny Jones
Downloading PDF. Please wait...
Tuesday 18 May 2010

Around 200 people attended a Campaign against Climate Change vigil in London on Saturday night.

They gathered in Trafalgar Square before marching to parliament, where they listened to speeches and held art events throughout the night. The vigil was held to ensure that climate change is on the new government’s agenda.

Labour MP John McDonnell celebrated the defeat of the third runway at Heathrow.

Suzanne Jeffrey of the campaign’s trade union group said that the government’s pledge to cut departmental emissions by 10 percent in the next year must not be met through attacks on jobs and public services. 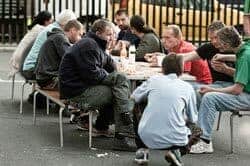