Campaign supporter Nahella Ashraf pointed out, “These sort of books can be found in every Muslim’s home.”

Two undercover police officers befriended Munir and pretended to be Muslim converts. They then spied on him and his family for over a year, gathering “evidence”.

Snippets of conversations taken out of context became the sole basis of Munir’s conviction.

Although his son Harris, supposedly Munir’s right hand man, was acquitted of all terrorism charges.

Munir’s family and supporters have been campaigning for years over this miscarriage of justice.

Moazzam pointed out that, “The head of counter terrorism in the North West, Tony Porter, said ‘We did not recover any blueprint, attack plan or endgame, the conviction was not to do with any plan for physical attack or any attack plan—it was to do with ideology’.”

Moazzam contrasted the Farooqi conviction with the case of Ryan McGee.

“A former soldier, McGee, from Manchester was caught with two improvised explosive devices to which he had added nuts and bolts in order to maximise any shrapnel wounds.

“He also had EDL flags and KKK literature.

“Knowing that McGee had an ideology and a set of weapons—which Munir Farooqi did not have—McGee was given a two-year jail sentence. The judge refused to refer to him as a terrorist.”

Munir’s daughter Zulaikha Farooqi said, “We will not give up until our father is free.”

Get involved, go to freemunir.org for more information and to sign a petition in defence of Munir. Free Munir Farooqi on Facebook FreeMFarooqi on Twitter
Topics Guantanamo, Moazzam Begg 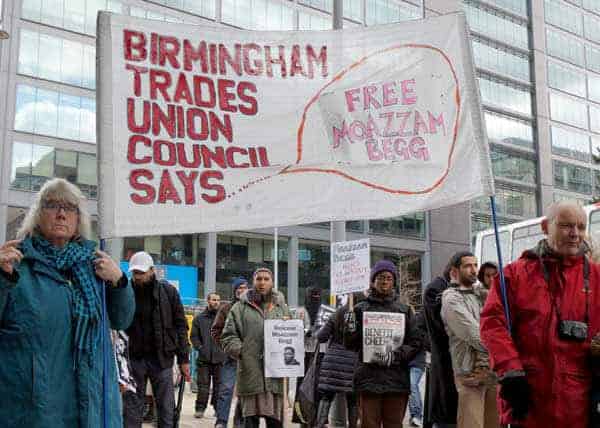 Freedom at last for Moazzam Begg