This article is over 15 years, 3 months old
Over 90,000 members of the PCS civil service workers’ union were set to vote on a deal to end their long-running dispute over job cuts, rights and services from Wednesday of this week.
By PCS member
Downloading PDF. Please wait...
Saturday 14 October 2006

Over 90,000 members of the PCS civil service workers’ union were set to vote on a deal to end their long-running dispute over job cuts, rights and services from Wednesday of this week.

The group executive committee of the PCS in the Department for Work and Pensions (DWP) voted last week to ballot members on management’s offer.

This is despite the fact that none of the union’s original demands have been met.

Some improvements in conditions have been won, particularly around sick procedures. But these remain draconian.

The ballot was originally due to take place in late August but it was suspended because of the threat of victimisation hanging over union activist Darren Smith.

Darren was accused of leaking sensitive documents to the House of Commons DWP select committee, and has now been demoted.

While voting to end the dispute, the group executive will continue to fight Darren Smith’s case and will support calls for industrial action in his East Anglia region.

The union will also consider a separate ballot for national strike action should Darren lose his appeal.

The PCS is also set to ballot for civil service wide strike over jobs, probably in January, and it is vital this vote is won.

Activists should campaign to win a vote to reject the management offer in the DWP ballot. They should also begin the work now to win a yes vote in the national ballot.

The DWP ballot closes on 31 October.

lSome 2,200 members of the PCS union at the Identity and Passport Service were set to strike on Friday of this week over pay.

The workers are angry that they have not yet received a pay offer for 2006.

We will also be carrying out a work to rule. 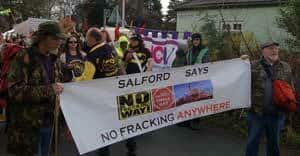 Unions back camp against fracking