This article is over 13 years, 0 months old
Fascist leaders are urging their followers to keep their Nazi politics under cover, but the mask just keeps slipping, writes Esme Choonara
Downloading PDF. Please wait...
Tuesday 12 May 2009

Activists determined to stop the fascist British National Party (BNP) grabbing seats in the European elections on 4 June launched a flurry of mass leafleting, cavalcades, protests, gigs and meetings over the last week.

The campaign has got the BNP worried.

It fears that its fascist politics could damage it during the elections, and is urging activists to keep them under cover.

An internal memo to BNP members leaked last week warned that “any adverse publicity arising from careless remarks reported in the press could wreck our chances of election”.

Under the leadership of Nick Griffin – who has been convicted of Holocaust denial – the BNP has attempted to present itself as a “respectable” party. But the lie keeps being exposed.

Last week it emerged that South African white supremacist Arthur Kemp is helping out with the BNP’s European election campaign.

Kemp is the editor of the BNP’s website and the author of the March of the Titans: A History of the White Race, and The Lie of Apartheid.

He was arrested in connection with the murder of ANC activist Chris Hani in 1993.

Kemp was released without charge but information drawn from a list of names he produced was found at the home of Janusz Walus – who shot Hani.

With just three weeks to go to the elections, Unite Against Fascism (UAF) has been working with other groups and trade unions to expose the BNP as Nazis. It is encouraging people to use their vote to stop the BNP.

One of the key national focuses is the Love Music Hate Racism festival in Stoke on 30 May.

Transport has been booked from around the country to take people to the event.

The festival is a key chance to bring large numbers of anti-fascists together just days before the European elections.

Everyone who attends will be asked to join in UAF activities in the remaining days of the campaign.

Sadia, an LMHR organiser in the West Midlands – one of the BNP’s target areas – told Socialist Worker, “We’ve been getting a great response at stalls and leafleting across the region.

“We’ve been out campaigning at colleges and shopping centres.

“We sold 20 tickets for the festival in a day at Wolverhampton university last week.

“The festival is gathering support in Stoke – we sold a lot of tickets on a stall at the weekend. Many more people have arranged to come back and pick up tickets and more leaflets next week.

Around 60 people attended a West Midlands UAF meeting last Saturday morning to discuss the threat of the BNP and to plan further activities.

Speakers included Clare Short MP, who pointed out that disillusionment with Labour is helping to fuel the BNP’s vote.

In Barnsley, South Yorkshire, around 200 people had a loud and lively protest against Griffin, who was speaking at a BNP meeting at The Fleets pub in the town.

George, a local activist, said, “Trade unionists from a number of unions, many with their branch banners, joined the protest alongside Barnsley MP Eric Illsley and six councillors.

“The BNP had claimed that its meeting would be 300 strong. In reality between 50 and 100 Nazis showed up.

“We are following up our protest with more anti-Nazi activities in the town.”

UAF activists were also out leafleting across the BNP’s target seat in the north west of England at the weekend.

The BNP has been active around the city of Carlisle in Cumbria as it hopes to pick up votes in this area.

Members of the RMT and Aslef transport unions campaigning for the No2EU – Yes to democracy group clashed with the BNP in the town centre last Saturday.

Shoppers told the leafleters that they were glad someone was standing up to the BNP.

Paul, from UAF in the north west, said activists are determined to counter the threat of the BNP.

“It’s not inevitable that the BNP will win a seat in this area,” he said. “There’s still everything to play for.”

UAF activists are joining other groups in Carlisle in leafleting homes and holding stalls.

“Encouragingly, we’ve had calls from new groups in towns including Keswick and Kendal where people want to get involved in the campaign.”

To get involved in the campaign to stop the BNP go to www.uaf.org.uk 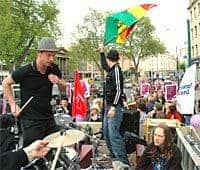