Campaign steps up a gear across the whole of London

This article is over 14 years, 2 months old
Hundreds of Left List supporters have been out campaigning across London as the election fight hots up. With just two weeks to go until the 1 May elections activists are doing everything possible to raise the campaign’s profile.
Downloading PDF. Please wait...
Tuesday 15 April 2008

Hundreds of Left List supporters have been out campaigning across London as the election fight hots up. With just two weeks to go until the 1 May elections activists are doing everything possible to raise the campaign’s profile.

In south London, a car cavalcade toured Streatham, Brixton and Southwark, with the local candidate Katt Young. In Croydon and Tooting activists leafleted an election meeting on Saturday evening in the mosque.

In south east London, Plumstead and New Cross bus garages, and Lewisham town hall were all leafleted as well as two mosques. Supporters had a lively presence on Woolwich High Street on Saturday and then took part in a car cavalcade.

Leafleters gave out 1,500 cards to football fans at Charlton Athletic football club. On Sunday, activists leafleted the crowds at the London marathon and key estates in Plumstead.

Campaigners at a shopping centre in Penge got a good welcome, as it became apparent that other political parties had abandoned the area. PCS civil service workers’ union members in Bromley have invited the Left List to a meeting this week.

Left List supporters in Tower Hamlets in east London were also out campaigning for an upcoming by-election in the Weavers ward. They leafleted the Boundary estate, which is being targeted for privatisation.

Campaigners were also out in Newham, east London. In north London, activists leafleted the Broadwater Farm estate in Tottenham, and others were out in Crouch End and Enfield.

Activists in Walthamstow, east London, on Saturday leafleted one of the wards in the area. There was a great response at Walthamstow dog track. Activists were out in Hackney.

Meanwhile in west London, activists ran stalls in Kilburn and Harrow Road on Saturday, a stall in Willesden, a walkabout in Portobello market, and leafleted in White City and door to door on the Lisson Grove estate.

Left List supporters held stunts in Hounslow and Feltham at the weekend highlighting the growing gap between the rich and the poor in Britain.

Leafleting took place in Acton and Kingston, and a mosque was leafleted in Southall. Barnet football club and an estate in the borough were leafleted. Supporters in Camden, central London, leafleted an estate and in Regents Park.

A number of areas will be canvassed this week, and many activists will leaflet their streets and estates. 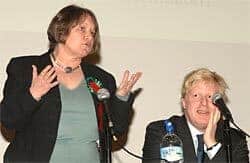 Lindsey German stands up for civil rights in London

‘We need a strong left voice on the London assembly’

A voice for young people in Greenwich & Lewisham

Can the Greens be a radical alternative to the mainstream?

Tapping into the anger outside London