Campuses debate where next for the movement

This article is over 12 years, 11 months old
The recent wave of occupations has brought hundreds of students into political activity for the first time.
Downloading PDF. Please wait...
Tuesday 24 February 2009

The recent wave of occupations has brought hundreds of students into political activity for the first time.

A new generation has learned how to lead a movement and win demands. Many people are now asking: Where next for the student movement?

While new occupations are still springing up, students at some universities have now been out of occupation for a long time. They are working out how to maintain the momentum of the campaign.

Essex is one such university. Students there were involved in the first wave of occupations in January. The impact on campus is still being felt.

Mark from Essex university told Socialist Worker, “When we first started, people weren’t accustomed to the idea of mass direct action, of occupation.

“Now we’ve done that it is an option for all the different campaigns on campus. We feel like we’ve helped to kick something off – not only at Essex but around the country. This is a new movement and a national movement.

“We are seeing people who were new to activity, who joined the occupation now publicising and organising for the national student demonstration on Wednesday.”

The anti-war movement has shaped the politics and opinions of a generation. Students at university today have grown up surrounded by the rhetoric and fear of the “war on terror” and the inspiration of mass anti-war demonstrations.

Mass campaigns against war and imperialism can grow and flourish through an understanding of Israel’s aggression in Gaza as part and parcel of the wider “war on terror”.

The energy of the movement can also feed into the fight for free education and against neoliberal education policies.

Students and education campaigners from across Britain were set to come together on Wednesday this week for the Another Education is Possible demonstration.

The G20 protests in London on 28 March and the anti-Nato protests in Strasbourg on 2 April are an opportunity to bring all the different strands of struggle and resistance together. 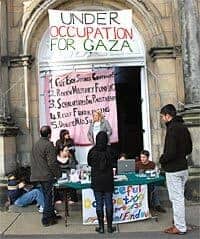 Liberate our universities from corporate control