CANDY UDWIN is a medical receptionist at UCLH hospitals in central London. She has devoted the last 25 years to fighting for a decent health service. Yet now, disgracefully, Candy is also being forced to fight leaders of her own union, UNISON. They are victimising her and another UNISON branch officer, Dave Carr, for fighting against New Labour’s privatisation of UCLH. Candy is standing as a socialist candidate in the election for the Greater London Assemby. She talked to Socialist Worker.

“I FIRST got actively involved in 1976 when my local hospital, the Elizabeth Garrett Anderson Hospital for women, was threatened with closure. The Labour government was pushing through a swathe of cuts. It meant the closure of 100 small hospitals in London. The “Save the EGA” campaign became a focus for people’s anger. It involved women’s groups, trade unions and community activists. We organised strikes and demonstrations. In 1976 local hospitals and council workers went on strike in our support. We occupied the health authority. We were taught how to occupy by pensioners who had occupied the Ritz hotel in the 1930s against unemployment. The public service unions, against the wishes of the TUC, called a national day of action over the cuts.

Future New Labour health minister Frank Dobson was then leader of Camden council and gave his support. We began a “work-in” at the EGA, which was amazing. I wrote a pamphlet called Keeping Hospitals Open: How to Occupy your Hospital. In 1979 we won, keeping the EGA open as a gynaecological hospital. I started working at what is now UCH in 1980. Two years later there was a wave of one day pay strikes which really took our union leaders aback. At our hospital ancillary staff and some nurses went on strike. Camden council workers struck four times in our support. Tom Sawyer, a NUPE full timer who went on to be the Labour Party general secretary, marched alongside me on a demonstration.

The next wave of action that hit the hospitals was in 1988, sparked by the crisis in the health service under the Tories. Just like this Christmas, there was a spate of horror stories about the state of the NHS. A group of nurses in Manchester went on strike. This set light to the anger over the NHS. We organised a day of strike action. It was tremendous. At UCH and Middlesex hospitals nurses streamed out the door. They set off a fire alarm in the nurse’s home to make sure everyone was up on time for the picket line. Thousands converged on Trafalgar Square. The police said we could not demonstrate, but they couldn’t stop us. Our action forced the Tories to put a billion pounds of extra money into the health service.

In London not many nurses had been in the union. But student nurses joined the union in droves in 1988. We recruited 109 student nurses to NUPE in a week. I was elected NUPE branch secretary in 1990. Soon afterwards the Tories threatened massive hospital closures in London.

In 1992 we organised a spate of one day strikes. When bosses tried to close the only male surgical ward, nurses refused to leave. We struck and won solidarity from patients and the local community. When bosses threatened to cart out the patients from the occupied ward, we said they would have to move them through a barricade of staff and television cameras. The management gave in and that ward is still open today.

In 1993, when the proposed closure of what was then UCH was made public, we set up a campaign. Across Camden people put up posters and petitions in pubs and clubs, tenants associations and local workplaces. In September 1993 we struck for six weeks. Future New Labour ministers like David Blunkett and our local MPs Frank Dobson and Glenda Jackson visited us. Tessa Jowell, now a health minister, joined one demonstration.

We won, and the trust is still getting an extra 1.8 million a year of “transitional funding”. When Dobson came down during the strike, management threw him out of the hospital. The next time Dobson visited he was New Labour secretary of state for health. Now he was pushing privatisation. When we met him he couldn’t look us in the eye. Our union leaders have no alternative to New Labour and the market. So they have turned their fire on union activists. What has made the most difference over the last 20 or so years is being an active socialist. I joined the Socialist Workers Party in 1982. The sense of anger about the world is deeper now than in any of those 25 years I’ve been fighting. That gives me great optimism for the future.”

'Stop the Sats' barbecue in Birmingham 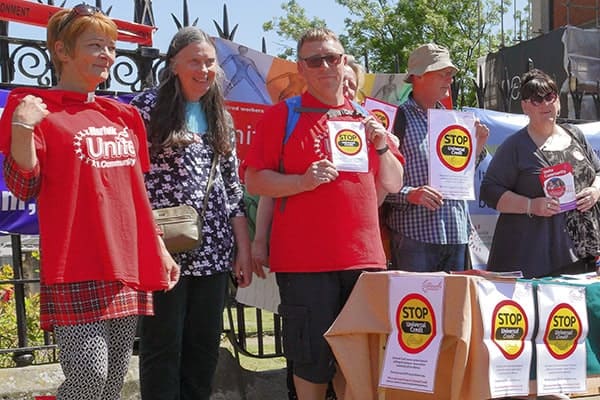