The collapse of Lehman Brothers, the fourth biggest investment bank in the US, has left the world reeling.

Millions of people are worrying for their jobs, homes, savings and pensions.

It was entirely predictable that the financial system would go into crisis. The trigger was the US “subprime” mortgage crisis where lenders targeted poor people with loans at extortionate rates of interest.

It was clear from the beginning that millions would be unable to repay them.But the lenders made money from selling on the debts to other banks.

Now the chickens are coming home to roost. No one knows how deep the crisis will be or who will be next to fall.

Faced with this chaos, world leaders keep telling us that the economy is “basically sound” and that any crisis will be mild and short-lived.

As these leaders become increasingly removed from reality, working class people the world over are left to pay the price.

Our only solution is to fight back.

There are immediate demands that we can unite around. As millions face spiralling fuel prices we should demand a windfall tax on the obscene profits of the energy companies.

The fight to beat Gordon Brown’s public sector pay freeze can draw in the millions of workers across Britain whose living standards are under attack.

And as the crisis breeds greater global instability, we should demand that our government stops fuelling the spread of war and brings all the troops home from Iraq and Afghanistan.

Our leaders have no solution to the crisis because they are unwilling to challenge the priorities of capitalism – a system based on profit, competition and war.

What happens over the next few months depends on what ordinary people do. We should force the bosses to pay for their own crisis. 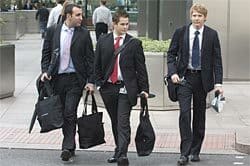