The Guardian newspaper ran an article on the Labour leader of Leeds City Council Keith Wakefield last week. It told a story of how he has stood up for benefit claimants.

Just two days later citizens of Leeds hit by the cuts in council tax benefit were appearing at the local Magistrates Court to answer summonses sent out by the same Keith Wakefield.

They had to explain why they not paid the 19 percent of the council tax that was now their responsibility following a council decision a few months ago. Generally a single person was asked to pay £125.06.

But the costs claimed on the summons were £70 and an extra £20 would be levied if a liability order was granted.

A letter accompanying the summons advised that it was not necessary to attend court to “discuss a payment arrangement”—but many did.

There they met a team of council officers who quickly set about trying to find ways of squeezing as much as possible from the non-payers.

The officers told people that costs claimed would not be waived unless people could set up a direct debit for payment.

There were, in fact, no magistrates in the court at the start of business. And only later would the officers apply on block for liability orders for those who had either come to an arrangement at court or had failed to attend.

The delay in seeing a magistrate meant that no one stayed and no argument was heard about the “proportionality” of claiming £90 costs on a debt of £125.

Benefit deductions will mean that the debt will not be cleared by the end of this financial year. At which point another welfare bill will no doubt appear.

That shows Councillor Keith Wakefield’s true concern for the poor of Leeds.

The anti bedroom tax group Hands Off Our Homes handed out leaflets at the court and signed people up to a campaign for benefits justice. We will return every Thursday until the rumoured 3,000 summonses have been dealt with.

Protests in Manchester were set for Thursday of this week when Greater Manchester Against the Bedroom Tax chair Honor Donnelly is among those summonsed over council tax arrears.
Topics Bedroom Tax, Benefits, Housing, Tories 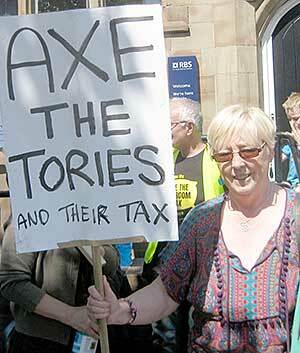