Carnegie Library in Lambeth, south London, has been occupied for over a week and is drawing strength from a constant stream of visitors, messages and donations.

A demonstration tomorrow, Saturday, to call on Labour councillors to back down is a big opportunity for everyone to show their support for the occupiers.

Striking junior doctors have visited the occupation this week.

Junior doctors Patrick and Jack were part of a delegation from King’s. Jack told Socialist Worker, “The occupation is really inspiring. I’m so glad people have the will to fight the brutal local government cuts that have left councils struggling to fund services.

“We’ve seen this too – our A&E department has been in crisis for the past four months because of funding cuts. Our strike and this occupation are about resisting flawed austerity.”

Patrick agreed. “We came down here in solidarity and out of sense of common cause,” he said. “This is about universal services, from libraries to health care, and the collective understanding that if we work together we can beat cuts.”

Junior doctors spoke at a regular evening solidarity rally outside the Carnegie occupation on Wednesday of this week.

Junior doctor Mona Kamal said, “This government has done a lot that is regressive, restrictive and cruel.

“But I don’t think there is anything worse than shutting down libraries while giving tax cuts to the rich. That is a society that is morally bankrupt.

“The treatment of disabled people, the privatisation of the NHS, the academisation of schools – this is an invitation for all of us to come together and unify. Now is the time.”

Lambeth’s libraries campaign is a shining example of how a well-organised political campaign can create blocks to councillors willing to do the Tories’ dirty work.

But desperate local Labour councillors have now landed themselves in hot water in their bid to counter the occupation.

They issued an official council letter after the pre-election period known as purdah began. This means that councillors and officers’ communications are restricted.

Purdah rules would not allow the propaganda piece the council pumped out yesterday with the face of cabinet member Jane Edbrooke and the council logo.

Edbrooke was the toxic face of the right wing Progress Labour group’s library cuts plan. But in a reshuffle this week she was relieved of her responsibility for libraries – a sign that pressure is working.

The campaign has mobilised hundreds on demonstrations, collected over 15,000 signatures on its petition and seen unofficial and official strikes by library staff.

It has also seen fierce internal opposition within the Labour Party. But it appears councillors Jim Dickson, Michelle Agdomar, and Jack Holborn have also ignored the policy of their own local Dulwich and West Norwood Constituency Labour Party (CLP), which opposes them.

The councillors wrote to members as “Herne Hill Labour”, the immediate area surrounding the library, parroting the same line as Edbrooke’s letter. Labour Party members have published a strong rebuttal that takes the councillors’ arguments apart.

The key focus for the campaign now is Saturday’s demonstration. Activists are going all out to build the biggest and broadest mobilisation possible. Make sure you are there, bring your union and campaign banners, and don’t let Lambeth’s library snatchers get away with it. 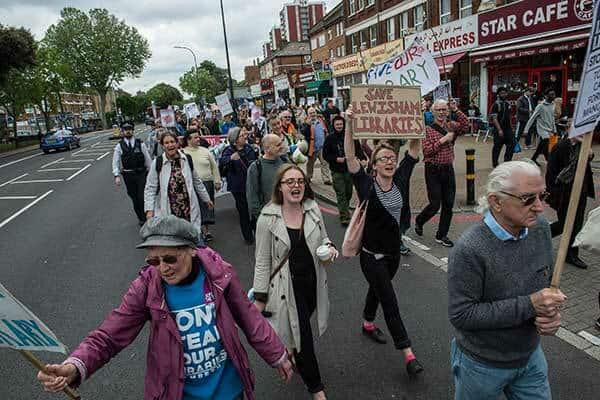